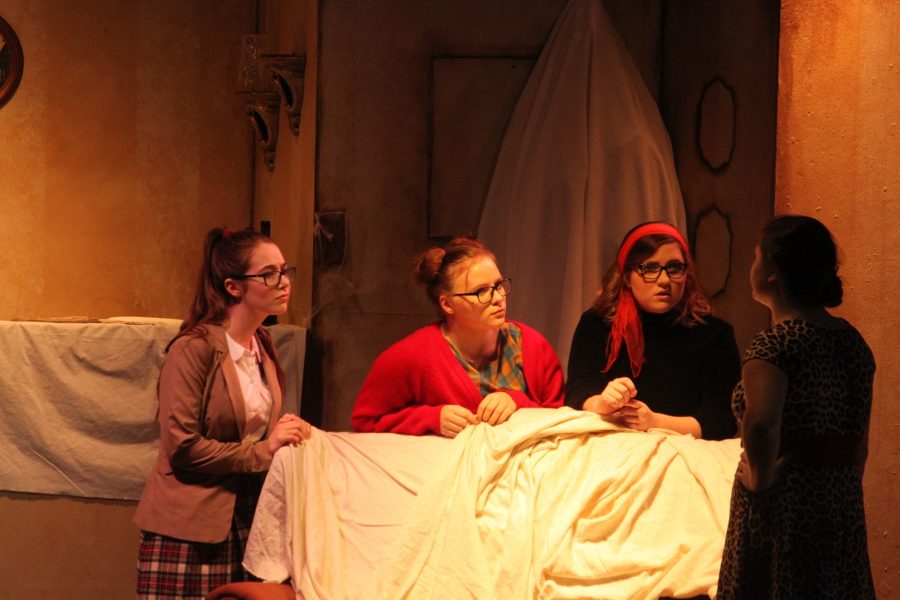 On Friday November 18 and Saturday November 19 the Fair Grove Theater Department put on a production of their fall play. The play was titled, Trixie the Teen Detective & the Mystery of Gravestead Manor. In the play, Courtney Deeds (12) played the role of Trixie Blue. She, and a her two friends Trudy and Bobby Jo played by Natalie Anglen (10) and Emma Hackett (10), traveled to an old abandoned house, Gravestead Manor to try and solve a mystery. Once they arrived at the home many strange things begin to happen. Upon their arrival they meet a group of characters, who had been in a carnival but were now living in the house. Soon other characters begin to show up for various reasons. As more and more characters arrive at Gravestead manor, the stranger the situation becomes, and the more Trixie Blue wishes to unravel the mysterious things happening at Gravestead Manor. Throughout the play, Trixie Blue finds more and more clues, leading her to the resolve of the mystery, the characters find the Moldavian crown jewels and then go their separate ways. Deeds stated, “My favorite part of being in this play was spending time with my friends and seeing the play come together. There’s a really satisfying feeling you get when you are able to experience a production from the first read through to the last performance.”
The cast practiced the play for about ten weeks, “I really enjoyed the play. I think the kids really enjoyed it as well, which is important to me. They were really involved and having a good time. It was a positive experience,” stated Amy Holland, the high school theater teacher. A lot of behind the scenes work also went into the production. Students from the stagecraft class, volunteer students, some who take theater classes in school, and all the cast worked as the crew for the play. On February 16th and 17th the theater department will have a production of Charlie and the Chocolate Factory.