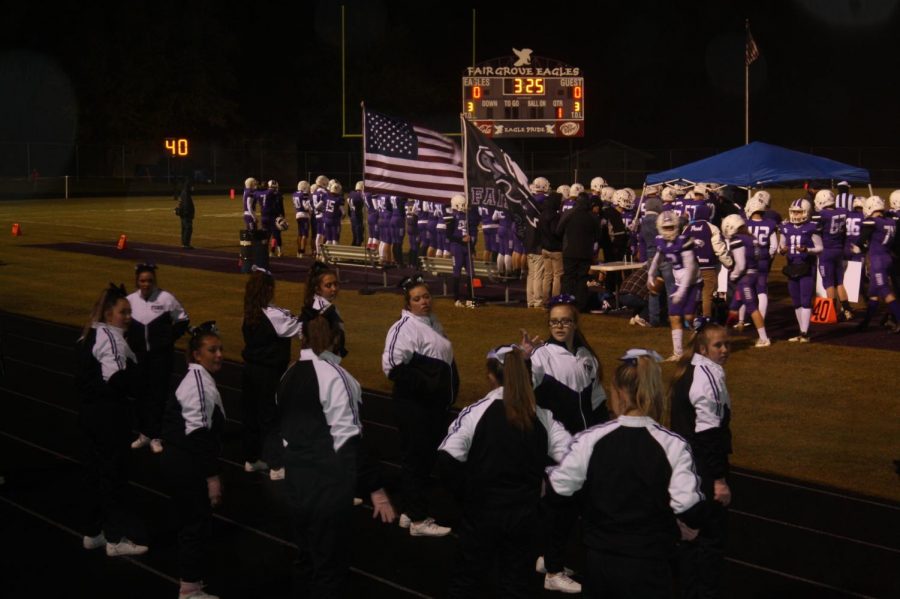 Fair Grove High School cheerleaders supporting the football team in their game against Clever on 10/29.

Piper Logan (10), a Fair Grove cheerleader, said, “The difference between cheering for basketball and football is that for the football we stand on the track and cheer, we do touchdown cheers, and then for basketball season, we stand on the side of the court, and we do a lot of free throws and rebounding cheers.” Logan also mentioned, “Cheering basketball is a lot different than football season because you are a lot closer to the game, and the entire court is a lot louder because we’re close together.”

Cheerleader Mckenzie Chandler (12) believes that the crowd is easier to get excited because of the very involved pep club during the basketball season. Chloe Reynaud (12) revealed, “It is easy to get the crowd going in both sports for different reasons. In football games, the parents stand up during cheers and then do defense cheers with us as well!” She went on to say, “However, in basketball, the pep club is standing in the bleachers right above us, so it makes it much easier for them to get involved in cheers with us.”

Logan’s reason for being a cheerleader is that she loves being involved in the community and getting a chance to get the crowd pumped up. She also loves to participate in activities in the community, like being a part of parades.

Reynaud loves being a cheerleader because she loves the team aspect of cheerleading. She also loves supporting Fair Grove athletes. Reynaud has made so many good friends throughout her course of cheerleading.

When Chandler was a young kid, she would go to basketball games and watch both of her sisters’ cheer. She looked up to her sisters and wanted to be just like them. Once Chandler got into seventh grade, she tried out for cheerleading and had made it on the team.