Indoor Girl’s Soccer May Be Benched, But Their Spirits Are Still In The Game 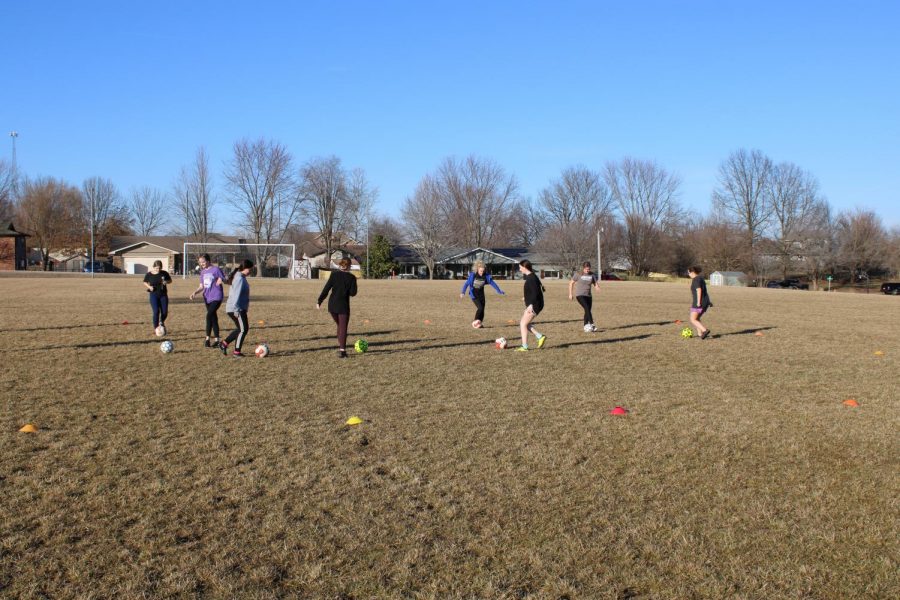 The Fair Grove Girls Indoor Soccer season came to an abrupt end after their first game at Lake Country Soccer; however the girls are still preparing for the upcoming outdoor season.

On November 21, the Fair Grove indoor girls soccer team traveled into Springfield to face off their first opponent of the season. They had been training like normal and expected a challenging but normal game. When their shoes hit the field, that’s not what they found themselves up against.

Due to some unfortunate events, the girls soccer team was having to deal with circumstances that they would say were less than ideal.

“Our first game was sincerely horrible!” Isabella Hammonds (11) revealed. She continued, “For more than half of our team, this was their first game.” The team started at a heavy disadvantage that ran deep into the ability of the players.

Despite their training, the girls could not beat their opponents- a large, private school team. Evyn Jones (10) shared, “The first game was bad, we lost 17-0 which is incredibly bad for soccer. The first game made me realize how unprepared we are for this season.”

Upon seeing the results of their first game, the coach was faced with a hard decision. They decided to pull out of the competitive side of the indoor season all together, using the rest of the girls indoor soccer season to prepare for the upcoming girls outdoor soccer season. The girls, now with a new understanding of the teams they’re against, have found that their training has improved and the players will continue to work on their skills so that they are ready to use on the field.

“Our goal is to make a goal! Last season we only made one the entire season. Looking at our first indoor game, and our last, I believe this goal will be very hard to reach, but I have faith in my team,” Hammonds stated. There is no doubt this has been a revealing experience and has impacted the girls on the team. Determination has only risen for the team and is pushing them to excel at the outdoor season.