Color Guard: The Art of Choreography and Flags 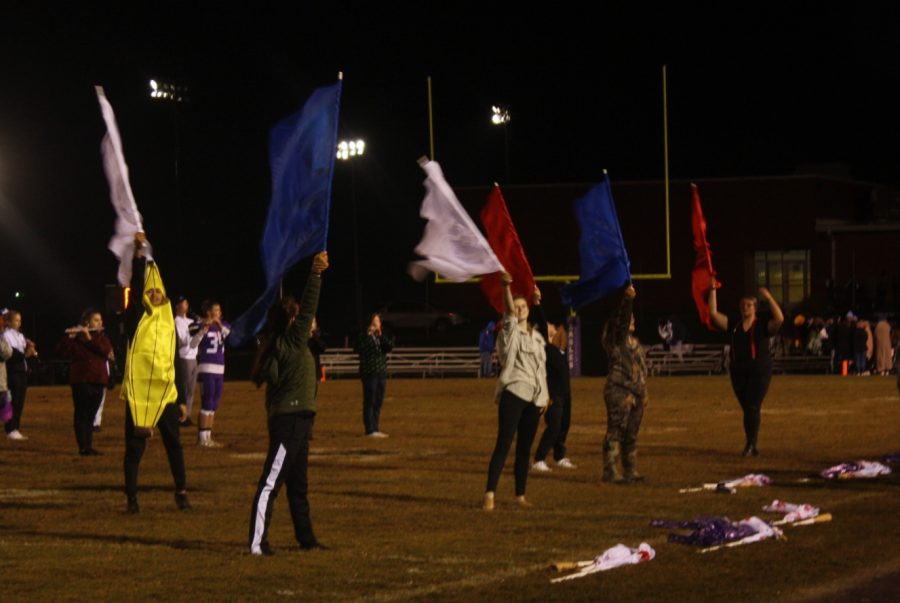 Fair Grove High School’s Color Guard is a group of students that work together with Fair Grove’s Band to create a visual and musical display throughout the school year.

Lydia Engel (12) talks about the difficulty of guard,  Engel said, “We work with all sorts of equipment in guard ranging from flags, swing flags, riffles, air blades, and even baseball bats.” Engel continued, “Guard is a combination of managing dance elements whilst also maneuvering your equipment around you and in the air without dropping or forgetting your choreography.”

Color guard provides an enhancing visual aspect for the band. Reese Wells (9) says that the color guard adds, “Something pretty to look at while you’re listening to the music the band is playing.” Wells says that the choreography helps, “Catch the eye,” of those in the stand watching.

Engel explained, “The guard’s job is to convey the story behind the show to the audience and we rely on the band to support us through that.” Engel said, “The most difficult part of guard isn’t learning the skills, it’s memorizing the correct choreography sequence for an entire show.”

Audra Harmon, color guard’s sponsor, conveyed her love for the way band and guard work together. Harmon said, “Although you can have marching band without guard, the guard adds a visual element to the band that is hard to obtain without the color guard. We can help tell the story in a visual way, rather than the musical aspect.” Harmon explained how each group appreciates what the other brings to their performances.

Color guard goes to early morning practices with the marching band. These practices start around 6:30-6:45 in the morning and last until the end of 1st hour. After marching season ends, color guard transitions to marching on a field to marching through streets. They perform at parades like the Fair Grove Christmas Parade and the Fall Festival Parade.

The current group of color guard members includes students from all grade levels. Harmon described the color guard members as, “Hard working, and driven individuals who want to make color guard the best experience for everyone.” Harmon explained that she has really enjoyed the members she had this year, “This is the first year in a long time that I haven’t had to constantly remind them to practice. They just want to be the best.”

The Fair Grove Color Guard team includes underclassmen Reese Wells (9), Hadie Wingo (10), and Stephanie Dunham (10). The upperclassmen include Madi Ellis (11), and Kris Hunter (11). There is only one senior in colorguard for the 2021-2022 school year, Lydia Engel. Harmon said, “Lydia Engel is the only senior I have on guard this year. She has taken on the role of captain and has done an amazing job of leading with respect.”

Engel explains what color guard is to her, “To me, color guard has been a wonderful way to make new connections. The people I’ve met through guard and the experiences I’ve had have all been incredible.”