The Half Life of Mrs. Dunning 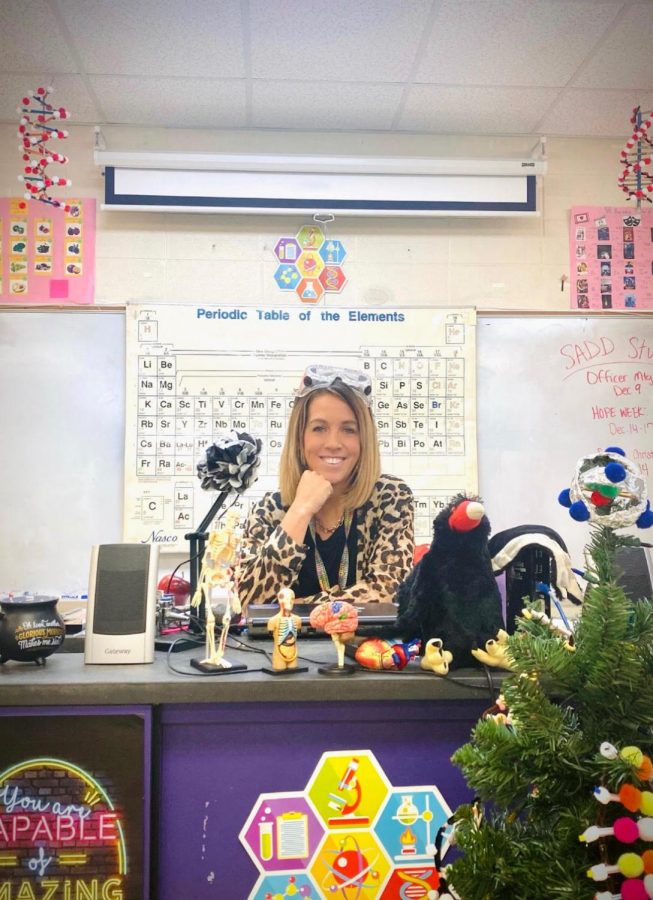 " A photo of me in my element....get it?.....because the periodic table." -Mrs. Dunning. Photo credits to Lindsay Dunning.

Lindsay Dunning, the Fair Grove High School biology and chemistry teacher, has been in the Fair Grove community since she was a child, but who is Mrs. Dunning outside of the classroom?

Dunning has been bleeding purple before she even taught high school science courses. Being a Fair Grove local, it only made sense to Dunning to become a teacher at a school she had grown up at. “I chose Fair Grove because this is where I live. It’s my hometown. It’s a great place to raise a family. Also, that Fall Festival is legit!” Dunning stated. If she could thank those for making her interested in science it would be Steve Irwin and Jon Foster.

Before inspiring those around her at Fair Grove, she worked in the Animal Biology field. Dunning’s specialty when working with animals was working with African animals. Dunning expressed, “Before I became a science teacher, I worked in the Animal Bio field as a zookeeper at Dickerson Park Zoo. I mostly took care of African animals. My favorite are the big cats.” Dunning has an fascination with most animals other than the ones found continents away. Her own personal collection of animals includes two dogs (Sharky and Louis), a cat (David Binx), two birds (Casino and Ace), and three fish (Jelly, Toast, and John Cena).

Dunning has been and continues to be a role model for so many students within the purple kingdom. Paige Robinson (12) is Mrs. Dunning’s student aide. Robinson is also the vice president of Students Against Destructive Decisions (SADD) under the sponsorship of Mrs. Dunning. Robinson explained, “Mrs. Dunning has acted as a great mentor. She has offered me great life advice as well as advice for college.”

Her creative and bold personality doesn’t just stop with her eclectic memories with Africa’s biggest cats or the phenomenal life advice she gives to her students. Her experiences have also given way to hobbies many never have experienced. Two of Dunning’s notable hobbies include falconry and storm spotting. Along with her extravagant hobbies, she also enjoys typically hobbies such as reading, Zillow watching, and cheering on her two young daughters playing basketball.

Dunning has had an impact on many of the students at Fair Grove. Robinson expressed her gratitude, “Mrs. Dunning is super creative and talented and one of the best teachers that I know!” With many years to come in her science teaching career, Dunning will continue to be a valuable member of the Fair Grove science department.