A Young Start to Speech and Debate 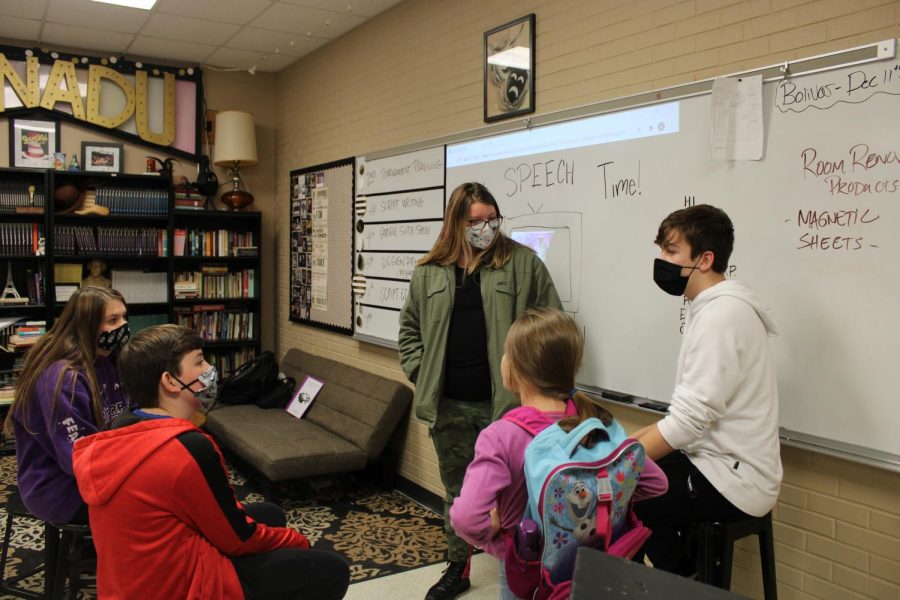 As fourth quarter dawns on Fair Grove Schools, the Middle School Speech and Debate team begins their training for tournaments that tests their knowledge and skills in the art of speech.

Middle School Speech and Debate offers an experience for middle school students to train how to properly debate and perform scripts for upcoming competitions. The middle school club is available for grades sixth through eighth and takes place every Tuesday after school until 5:30. The club is ran by Amy Holland, a high school theater and speech department teacher at Fair Grove, and Cooper Zumwalt (11), a student who aids Holland in her classroom.

The club is to prepare students for Speech and Debate competitions that follow in the later months. Zumwalt remarked, “We work on cutting down scripts to fit time constraints, creating distinct characters for the performances, memorizing, and creating movement for the piece. As an authority figure within the club, I try to keep the kids engaged by making it a positive experience and a good time. We have a lot of laughs at practices, and I think that is important to have when we are first teaching them.”

As the middle school speech team tends to be a little less experienced, Holland has her high school students tutor and help the younger candidates to compete better at events. Zumwalt stated, “Walking into tournaments, I am optimistic that our group is going to perform well. They are a dedicated group of kids, and I can’t wait to see where that dedication will take them.”

Keith Nolan (8) explained, “Middle School Speech and Debate is a great opportunity and experience for me to get rid of any fear of public speaking. It’s a great and fun way to bond with my friends within the club. Also since we mainly work with high school students I can start building relationships with future student peers.” Alyssa Faubion (8) went further by saying, “I’m fairly new to the club so I’m now just getting into the fine details of it. I have to say it is so much fun to be with the people there, we all tend to share common interests so it’s really easy to start friendships.”