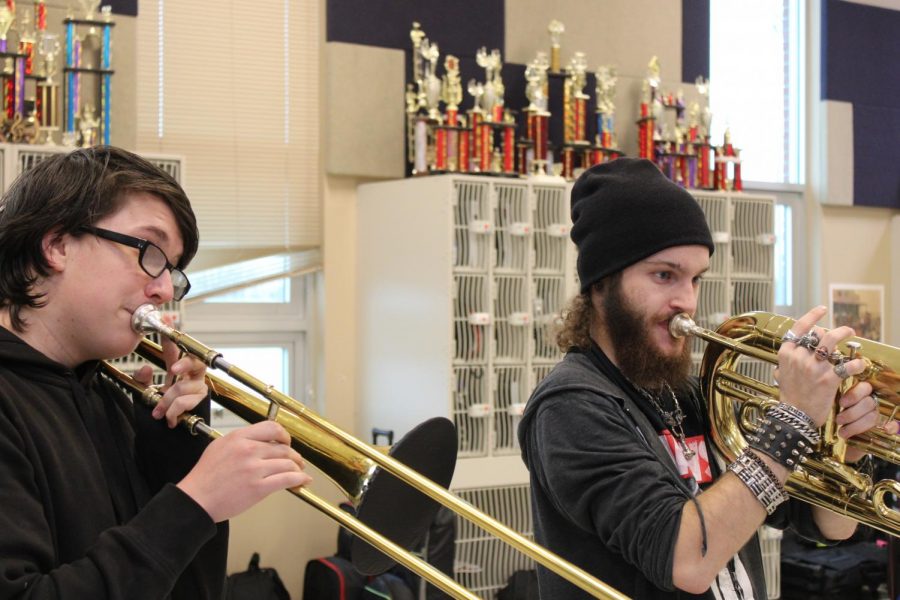 Photo of Glen McDaniels and Nate Brigman preparing for the showcase senior performance.

The Fair Grove High School Marching Band was unable to compete during their 2020 season due to the COVID-19 pandemic.

To make up for the loss of their competition performances, the band fashioned a showcase to show off the work they put into their season.

Natalie Palomo, the High School Band Director, commented, “I wanted the kids to have a chance to perform without anything else going on, where the audience would be there purely for them.” Palomo continued, “Since our only other performances were football games, we scheduled our own event.”

The showcase was free to enter, but it was encouraged to purchase snacks that the band boosters fund raised with.

The band showcase was hosted on November 14th, at 5:00 pm. There were performances from the senior band members, where they performed Amazing Grace. The color guard performed choreography to the song River by Bishop Briggs, and the band as a whole presented pep songs right before executing their Realms of Magic show.

“This just gave us an ultimate goal to work towards. We had a performance that would be just about us, so it gave us drive to work to make sure it was a good show so we didn’t let our audience down. It gave us a chance to put something together this season to still be proud of,” stated Palomo.

The only other performances, as stated, were the football games. The band prepared for both the games and the showcase just as much as previous years. The band drum major, Easton Beltz (11), added, “It didn’t necessarily help me cope, but it did teach me and the band that we are a marching band because we love what we do, not just for the awards and titles given to us. The best thing the showcase gave the band was an opportunity to be seen this year. It still gave us a voice as a program to be heard. I feel that we prepared for the showcase just as much as a competition because of this strange year. The only difference is that we had one time to stand alone as a group.”