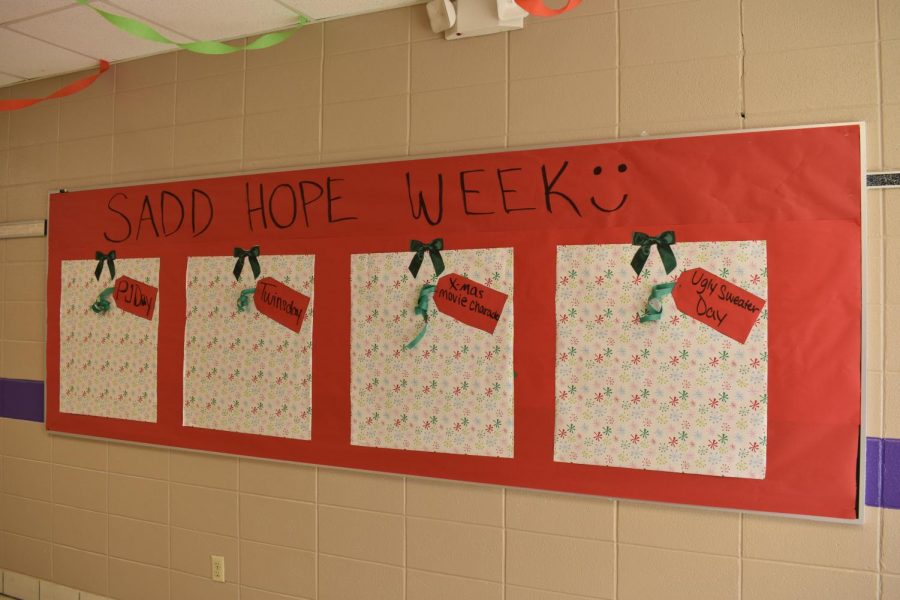 Fair Grove High School is participating in Hope Week, organized by Students Against Destructive Decisions (S.A.D.D.), on December 15th-18th to raise awareness and prevention of suicide.

Hope Week is a week dedicated to suicide prevention. “Hope week is a week like red ribbon week but instead of focusing on distructive habits or objects, we focus on preventing students from committing suicide,” Gracin Wood (12), a S.A.D.D. officer, said. “Each day has a theme and it’s extremely important to bring awareness and focus on the good things in life!” This week isn’t just a spirit week to raise awareness and morale, it’s meaningful to students as well.

Zoey Hupman (11), another S.A.D.D. officer, shared that she has known people that have attempted suicide. “…it’s painful to see something that you could have prevented from happening so easily,” Hupman continued. “I want to show people that there is more to life than the pain that they are going through and that they are really strong for waking up every morning and doing the little things.” Hupman and Wood wish for students to be mindful of encouraging others during Hope Week.

Hope Week is a reminder to students to support each other. Wood said, “Sometimes, the most support doesn’t come from family, but from friends. And if you can stick with each other during the worst points in your life, you know they will be there for the better parts.” S.A.D.D. has created an opportunity for students to remember this before their holiday season. Hupman shared, “It may not seem like it at times but people really do care about you and if you need help don’t be afraid to reach out to someone.” Along with encouraging others, S.A.D.D. encourages students to participate in their spirit days.

The spirit days for Hope Week will be the week before winter break, the 15th through the 18th. Starting on Tuesday the 15th, Hope week begins with “wake up to suicide prevention and do the simple things. Get up, get dressed, and come to school” PJ day. On the 16th, Wednesday will be “loneliness is a contributing factor to suicide but friends encouraging friends helps so team up with each other” twin day. “Substance abuse is one of the leading causes of suicide. People use drugs and other substances to hide their pain and use it as a costume so we’re encouraging kids to wear a costume instead of using other substances to hide how they feel” dress up as your favorite christmas character day on Thursday the 17th. Lastly, Friday the 18th will be “Some people ignore the fact that suicide is a real thing and they ignore the signs. They shrug off the small things and make them seem like it’s not a big deal. We are encouraging students to pay attention to the good the bad and the ugly and wear their ugly Christmas sweaters” wear an ugly Christmas sweater day.

Avaliable 24 hours a day in English and Spanish, the National Suicide Prevention Lifeline is 800-273-8255.