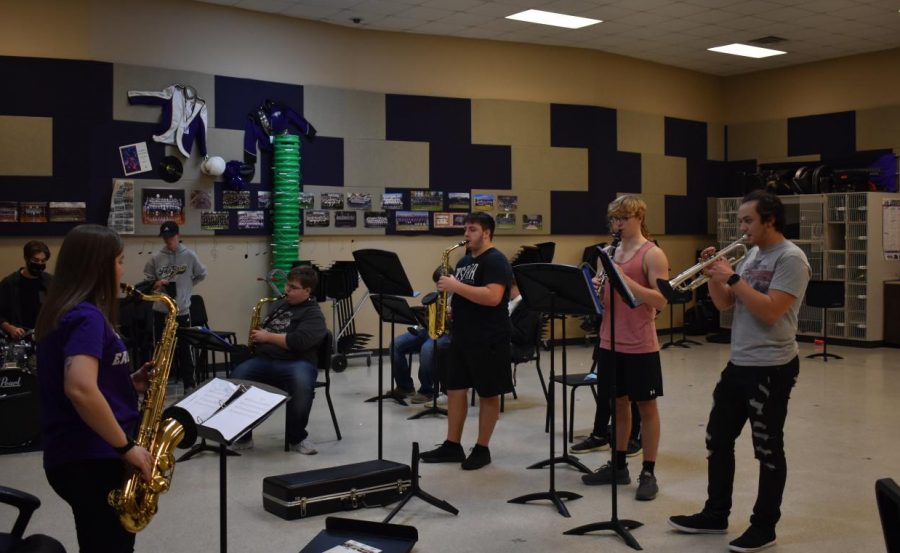 Fair Grove band students warming up before a performance.

This year, the Fair Grove community and school have faced the challenges of a global pandemic and the changes it’s made. The Fair Grove High School band has gotten through their marching season and are now entering concert season.

In marching season, the band normally performs a field show, while during concert season they perform music for judges and a score. This year all competitions have been cancelled or moved online, where the band will record a performance and send it in. This is a huge transition from the normal year and has forced changes in the normal routine. The High School Band Director, Natalie Palomo, commented, “We’ve had to rearrange our traditional concert arcs to be instrument-specific pods instead so that people are only within six feet of their section. This has led to some weird balance issues to work around in rehearsals. We also still use bell covers over every instrument like we did in marching band.”

Keeping the attention of students while practicing without an in-person concert is a goal of both the student leaders and Palomo. Palomo said, “We’ve still been rehearsing music and I’m trying to still find music that is different and keeps the kids engaged. Rather than go easier on our music this year, I’m hoping the consistency in difficulty will help maintain some sense of normalcy.”

One of the main changes to rehearsals are AMI days, which are days where students work online from home. This works for classes that have book work, but for the classes that are more hands on, like art or band, it can be difficult. Alex Bates, a leader in the band, added, “The AMI days are not great for us. AMI days give us time to practice individually, but without being able to practice as a whole we cannot blend everything together through the band as a whole.”

Fair Grove schools are attempting to make this year as easy as possible. Easton Beltz, the drum major, said, “The school has allowed me and all the other band kids to continue what we love doing, and that is making music. If the district didn’t allow us to have band this year I would be devastated, but we have been able to, which has kept me going through COVID.”