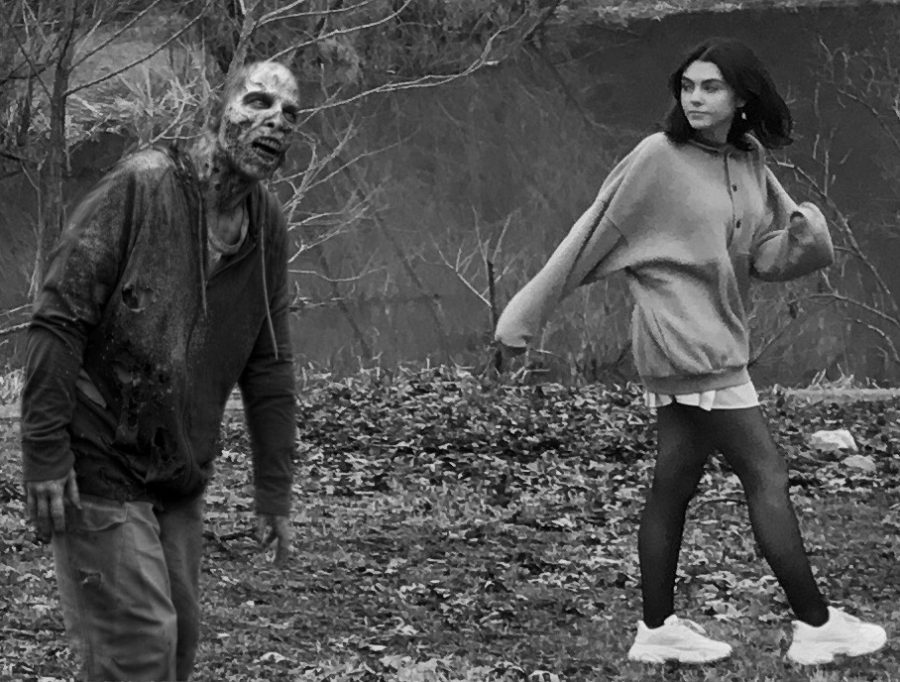 The Walking Dead, a TV series based on the comics by Robert Kirkman, aired for the first time in 2010. Episode one of the show came out on October 31st, and garnered 5.35 million viewers. AMC had never had such a successful series premiere. This episode, titled Days Gone Bye is one of, if not the most iconic episode of the series to date.

Episode one opens with sheriff, Rick Grimes, driving his police car to an abandoned gas station to look for gas. The place is littered with cars, dead bodies, as well as the remains of a camp. As Rick sees a sign that says “NO GAS”, he turns to leave. Just as he does so however, he hears a shuffling sound. He crouches down on the ground and looks under a car to try and see what it is. He is surprised to see what looks to be the feet of a child wearing slippers and a robe. The child reaches down, picks up a teddy bear, and continues walking. Excited, as this is the first sign of life he has seen here, Rick goes after her. He calls out as she’s walking away from him, telling her he’s a policeman and not to be afraid. His voice stops the little girl in her tracks, and as she turns around, the first walker of the series is revealed. There is a large hole in the side of her face, blood dripping from it. Her teeth are exposed, and there are signs of other injuries all over her body. The camera takes a good long look at her, letting this moment really sink in. As she starts shuffling towards Rick, he is hesitant, but pulls out his gun. He shoots her, and her body falls to the ground. Immediately after, we are greeted with the show’s iconic theme song and the opening credits roll.

This scene is iconic, and a great opening to the show. Right from the beginning, you know what this show is going to be like. Even if you knew nothing about the series prior to watching it, you immediately learn that it’s set in a world where a zombie apocalypse has occurred. This scene also demonstrates the harsh reality of said world, as the very first zombie you see our protagonist kill is a little girl. For these reasons, I like this scene and think it does a good job introducing you to the show.

Right after the opening, there is a flashback to before the apocalypse. We see our main character, Sheriff Rick Grimes, and his partner Shane Walsh, sitting in a cop car eating. They’re just joking before the conversation turns somber and Rick reveals him and his wife Lori have been fighting. As they discuss this, the car radio reports a high-speed chase with two armed suspects, and the men stop eating to rush to the scene. At the scene, Rick is shot and badly injured. He lays on the ground as Shane desperately calls for an ambulance.

The next scene we see is set at some point after Rick’s injury, as he is in the hospital and Shane is bringing him flowers. He talks to Rick with no response, as he is presumably unconscious. It cuts to Rick, laying in bed, looking to be in pretty bad shape. Rick is responding to Shane, and talking about the vase the flowers are in. This time, Rick is the one not getting a response. He calls out, “Shane?” As he looks around the empty hospital room and sees no one is there, he glances over at his table and sees a vase full of flowers, but they’re all dead. When he reaches out and touches them, the petals make a dry sound and fall off the plant. Rick struggles to get out of the hospital bed, and falls to the ground as he tries. He calls out for a nurse to help, but is met with no response. And after going to the bathroom, drinking water from the sink, and realizing he has a beard growing, he opens his hospital room door. This is where things really start to get creepy.

As Rick steps out and looks around the hallway, he sees it’s completely empty, the floor littered with debris, lights flickering. He makes his way down the hallway limping and attempts to use a phone, and fails. As he turns the corner, he looks through a door and sees a body laying on the floor, lifeless and torn apart. We get a closer shot of the body and see that it’s been completely mangled, with most of its torso gone. Rick, obviously quite disturbed, turns and walks the other way. After walking past pools of dried blood and seeing walls littered with bullet holes, he comes face to face with one of the most iconic images from the series. It’s two huge metal doors, closed tightly with a padlock securing them, with the words “DONT OPEN DEAD INSIDE” spray painted across them. As he stands in front of this scene, groans can be heard from the other side, and soon there is a pounding on the door. Hideous hands with grimy nails reach out between the gap and try to get a hold of anything they can.

After failing to get the elevators to work, Rick heads down the stairs. He covers his eyes as he opens the door to the outside and the bright light floods in. Once his eyes adjust, he walks past rows of bodies poorly covered in white bags. The camera zooms out and we see that the entire courtyard of this hospital is full to the brim with rows upon rows of these bodies. There are trailers filled with them stacked on top of one another. Rick, still wearing his hospital robe and without shoes, quickly leaves the area and climbs up a hill. At the top of the hill he finds army trucks and helicopters, as well as more bodies, all in bags.

It cuts to Rick walking down a street and stopping to pick up a bike. Feet away from the bike he spots a corpse, everything below its waist completely torn off. As he lifts the bike, the corpse turns to him. Rick falls over in shock and fear, as this is the first walker he’s actually seen thus far. The corpse reaches her arms out to him and snarls, unable to move towards him. He quickly bikes away.

Not long after, he throws the bike to the side and rushes up to a house. As he throws the already partially open door all the way open, he calls out for his wife Lori as well as his son Carl, sounding more and more desperate the more time passes. Rick collapses on the floor and cries, still calling out for his family.

He leaves the house, slowly making his way down the steps and back to his bike when he notices a person in all black walking on the street. As he’s distracted by said person, a young boy sneaks up behind him and hits him over the head with a shovel. “Carl?” Rick asked, confused. The boy calls out for his father, who we then see shoot the man in black, which turned out to be a walker, and make his way over to Rick and the boy. The father and son have a quick conversation about how they thought they heard him say something, and they know walkers don’t say anything. The father points his gun at Rick and interrogates him about his wound, before Rick completely passes out.