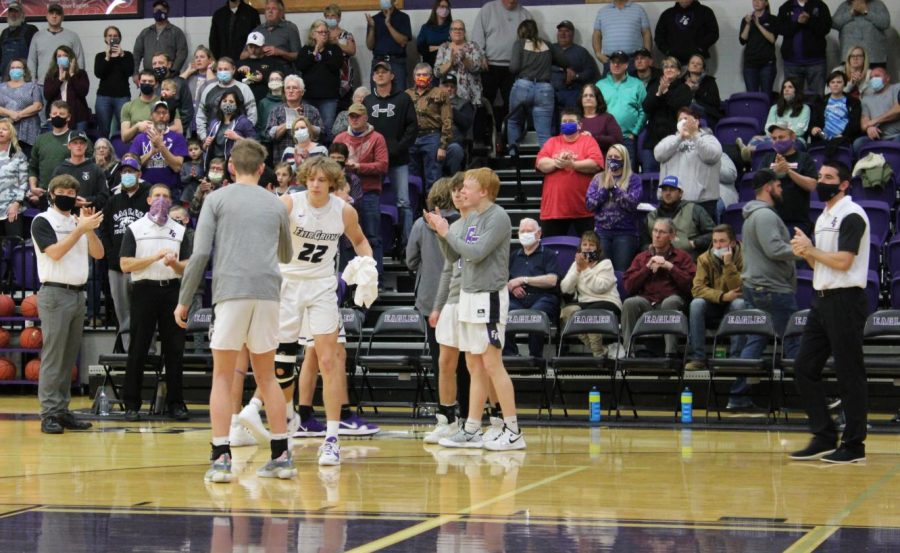 Cale Ramsey (on the right) clapping for starters at a home basketball game.

Cale Ramsey is leaving his position as the Head Boys’ Basketball Coach at Fair Grove High School after the end of this school year.

Ramsey has worked at Fair Grove for a total of four years. He taught for a year in 2012 and left, but then returned to teach and coach for the past three years. “I will be leaving Fair Grove all together. I have had an incredible experience at Fair Grove. This town, community, and school district will always hold a special place in my heart,” Ramsey explained, “The coaching position I will have next year allows me to be home more often, and with our first baby on the way, time at home is irreplaceable.”

Over the past three years, Ramsey has developed a reputation for himself. Athletic Director, Christian Overstreet, praised, “Coach Ramsey has done a tremendous job over the last 3 years. He did an outstanding job building positive relationships with his players and preparing them for their games and practices. There is no question that Coach Ramsey has continued to build upon the already strong culture of our boys basketball program. Whoever we decide to hire in the next couple of weeks is going to walk into a great situation that has a strong winning culture.”

Junior basketball player, Joshua Orr, also felt that Ramsey succeeded in his coaching goals. He complimented, “Ramsey was one of the most hardworking coaches I’ve ever known. Whether it be getting film from other schools, or spending hours clipping up our own film, he was always 100% into his job. He had the same competitiveness and desire as everyone on the team. He was not only a good coach on the floor, but he was a good one off of it. Whether you needed someone to laugh, joke with, or talk to, he was there. I think I speak for the basketball team, and the school, when I say he will be greatly missed.”

Addressing the time frame of the coaching transition, Overstreet commented, “This is a little late in the year for a change in a teaching/coaching position, but we have had to deal with later job openings in the past so we are prepared for what is ahead.”

In response to his leaving, Ramsey reflected, “What I am going to miss most about Fair Grove is the support you get from the community and the members of the school district. I will also miss the kids. Fair Grove has the “it” factor. It is an amazing place to be a part of.”

As for where Ramsey will be coaching next year, he is not able to disclose that information until the school board at his new job meets and officially votes on hiring him.

The primary question is who will be taking Ramsey position in the 2021-2022 school year. Overstreet stated, “The job is open for other candidates to apply. The person we hire will basically be replacing Coach Ramsey as the head boys basketball coach and taking on his current teaching responsibilities.”