Fair Grove Takes on Their Biggest Production to Date 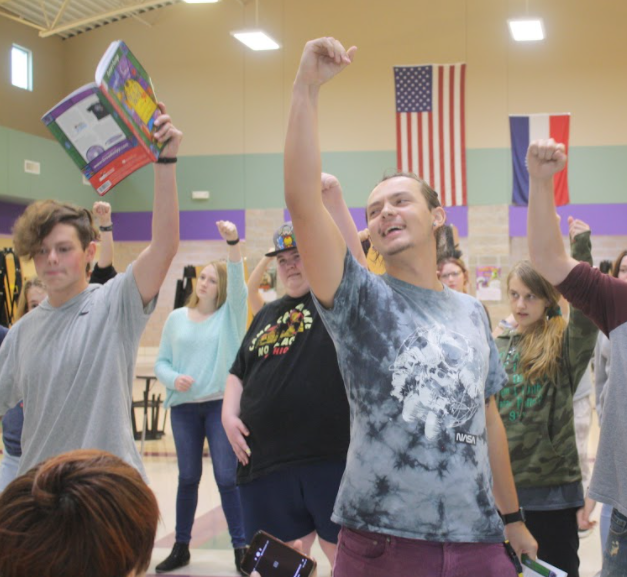 Fair Grove Theater practicing for Beauty & the Beast in the commons area in the Middle School.

This year, Fair Grove Theater Department is taking on it’s third musical with their newest production being Beauty & the Beast. The opening night of the production will take place in the Fair Grove Upper Elementary Gym on November 19th and 20th at 5:00 pm, and November 21st at 2 pm.

“Beauty and the beast is a timeless story which is really familiar to audiences. The show contains several well-known beautiful songs and it has a lot of big dance numbers so it’s going to be a really fun show to watch!” Mrs. Amy Holland, Fair Grove’s Speech and Theater teacher, remarked. There are currently over 60 students involved in someway in the production, making it the biggest production that Fair Grove Theater has been responsible for putting on.

Playing the star role of the musical, Belle, is a Freshman by the name of Karlee Marion-Swan. “It feels really crazy. I never thought that I would get a big part in the play, let alone the lead,” Marion-Swan stated. “I am brand new here from Washington state and we didn’t have a theater department at all…” Marion-Swan went on to explain that although her school did not have a theater program, there was a local theater program that would come to her school every two years that she always felt at home participating in.

Cooper Zumwalt (11), a five year member of the Theater program, will be playing the part of Beast. “For this show, I’m super excited to see all of the costumes. We’ve been talking about some ideas in class, and I can’t wait to see how we choose to interpret all of these characters,” Zumwalt explained.

Taking up the challenge of managing such a big production is a team of upperclassmen, each playing a very important role in the production of the show. The production manager of the musical is Alex Bates (12). According to Holland, “He will be coordinating with the directors and the technical staff to ensure the show runs smoothly. His job is one of oversight for the entire production and he utilizes his technical expertise to ensure everything works as it should.”

Devon Miller (12) will be taking the role of student director, which Holland described as “…a new role for Devon. He will be directing several scenes from the production and assisting myself and Kristen Walker, the music director.”