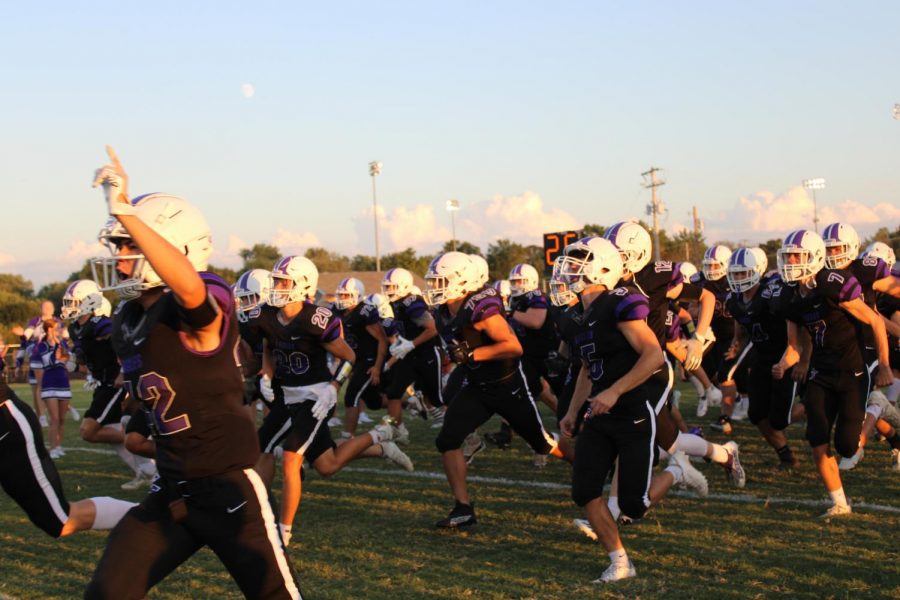 Fair Grove Eagles enter the field ready to play the Forsyth Panthers on 09/17/21.

The Fair Grove High School football team is charging through their 2021 season with no sign of stopping as they defeat the Forsyth Panthers 63-13 on September 17, Fair Grove’s homecoming game.

With a large crowd and high expectations for the game, the players had their own ideas about the outcome. Kyle Fritts (12) stated, “The expectations were to focus on us, and become better at the things we do. Forsyth’s major goal for the year was to beat Fair Grove, so Coach Voorhis prepared us accordingly.”

Like any event that is widely viewed within a small community, all of the eyes and ears were on the spectacle. This type of pressure can be nerve wracking and shake up a player beforehand. Calvin Zuch (12) expressed the importance of watching video tapes from previous games to gain knowledge about things that can be improved upon for the next game.

After the big win against the Forsyth Panthers, the Eagles had their own opinions about the outcome of the game. Zuch explained, “We played very well, but it wasn’t exactly the most challenging game. Our season after Forsyth will be more challenging, but it was nice to have a blowout game on our homecoming.” While this game was less of a challenge then most, as the season progresses there is no sign of stopping the Eagle’s determination to dominate the game.

After the game against the Forsyth Panthers, Fair Grove is maneuvering their way up the ranks within the Missouri Southwest Athletics Conference. Seth Hardison (10)  detailed, “This will heavily affect our season because that game was a conference game and now we are 2-0 for conference games and we are leading the conference.”

While the Eagles are the head of the pack in the Southwest Athletics Conference, several opponents stand in their way. Fritts gave his own opinion about games against opponents in the near future when he stated, “ You can’t make any assumptions this early in the year, but I am confident in my team and our abilities. We have one goal in our minds, win a district ship.” With the next upcoming conference game being held Friday October 1st, The Fair Grove Eagles will come face to face with Strafford Indians at home to play once again for a chance to advance up the Southwest Conference ladder.