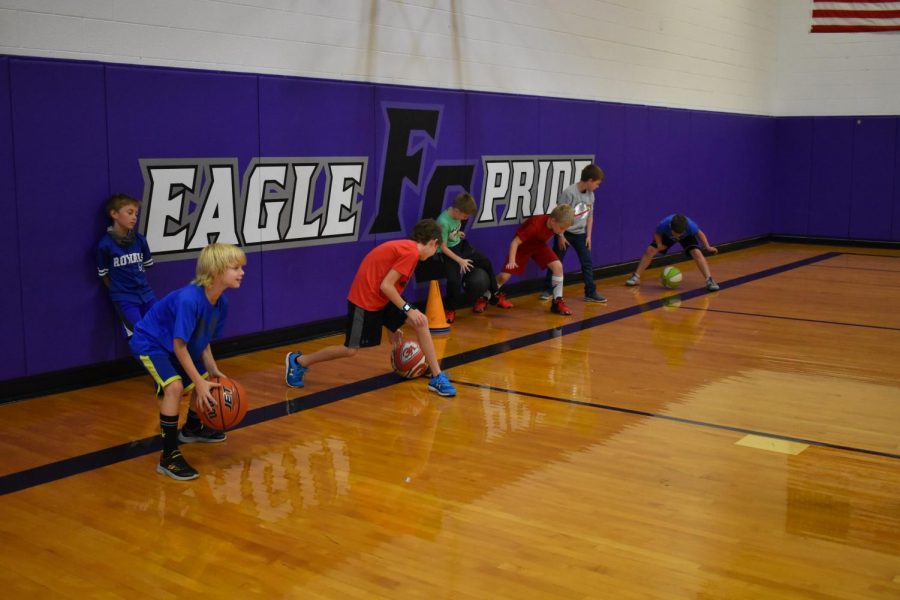 Young kids practiced their dribbling in basketball camp in the Upper Elementary gym.

The camp is for beginners to advanced players and costs $30. With their $30 donation, they received a T-shirt delivered straight to their classroom. The camp has fun games designed to teach the young kids the fundamentals of basketball. They do not only play games; they also do drills to help the kids learn how to pass, dribble, shoot, and use proper defense. The children will receive coaching from high school coaches and players.

Tucker said, “I think I will benefit a lot from this because I like getting to know the kids and seeing the kids, which makes me want to get involved.” Tucker also mentioned that he enjoys getting to know and form relationships with the kids attending the camp.

Tucker emphasized that he thinks kids at the camp will get to know the high school basketball players, then when the kids come to the basketball games, they get to look into the court and know who the players are. Tucker also said that the children get to learn what the high school coaches want them to practice before getting into high school.

Tucker explained, “I think they do improve as long as you have a ball in your hand and are working on the basics with the younger children it will improve their understanding of the game.”

Tucker believes that forming relationships early with these young kids is very important for their development in basketball. He wants to get involved with the kids that attend Fair Grove Schools.

The basketball camp will be held at the FEMA, upper elementary gym, and lower elementary gym. Different grades will be in different places. Tucker believes the upcoming basketball players have improved and is excited to see them at the high school games.