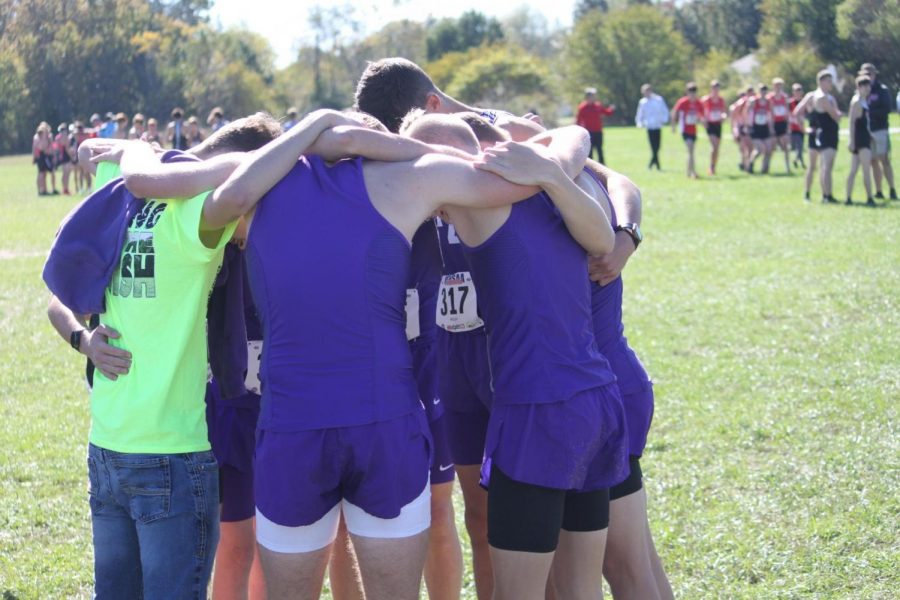 The Cross Country team in a huddle before the race at Clever High School.

This October 30th the Fair Grove Cross Country team sets off for districts. Districts will be held at Clever this year.

This year Draper thinks that they are in one of the most difficult districts in class 3 with Lamar and Ava high school in their district. Despite this, Draper said, “I still think that we will have 3 or 4 runners make state.”

Last year Fair Grove High School had two students go to state for cross country Luke Buescher and Liam Draper, however Luke Buescher got quarantined before he could participate in the state meet.

When asked why Draper was in Cross Country Draper stated, “I joined Cross Country because both my parents run and when I did a 5k as a kid I realized that I loved running more than any other sport I’d done.”  While fellow runner Lauren Thomlinson stated, “I am in Cross Country to get in shape and get prepared for the conditioning of basketball season.”

Thomlinson enjoys practicing and running with her friends, but she is excited to hop back into the basketball season. Draper also enjoys hanging out with the team more than the meets themselves and he also loves the atmosphere around the team.

“I always feel like I could be more prepared for a meet, but by this point, in the year, it’s to the point that you can’t improve that much physically it’s just a mental game now.” Draper then went on to say, “Having a good mindset is a big part of every sport and is even bigger in Cross Country because when you are nearing the end of a five-mile run, you have to keep a good mindset to give yourself the extra energy to finish the run.”

Canyon Crowley, a freshman Cross Country runner who also participates in football, tells how he enjoys participating in both football and Cross Country. Crowley mentioned, “I find time for both Cross Country and football by just basically finding the time to practice each when I can because once I accomplish something it is all worth it.”

“This has been a good year for the Fair Grove cross country team and we expect great things,” Draper said. Draper that he has high expectations for districts and hopes that the team can live up to them.