Kicking Off the End of Boys Soccer Season 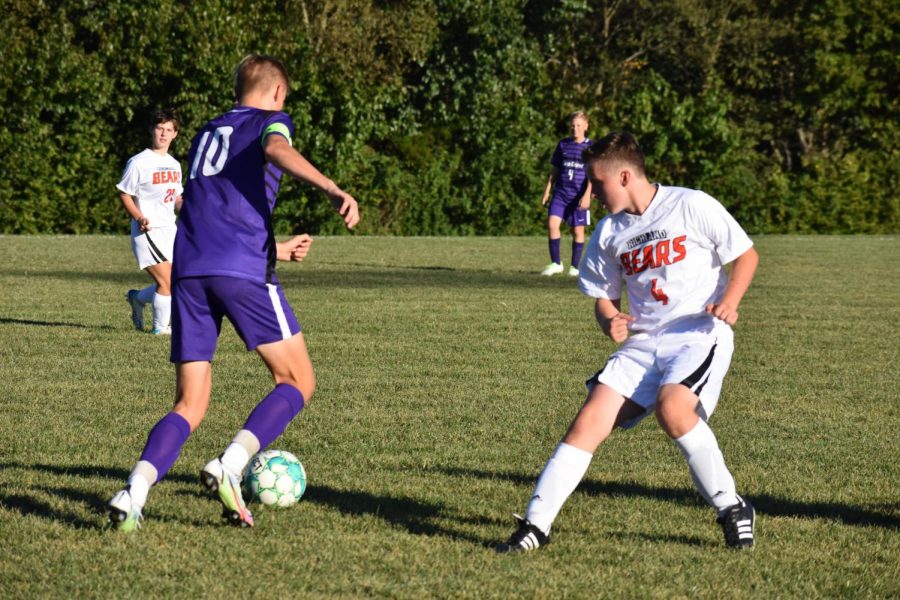 Joshua Orr (12) playing at the home game against Richland.

The Fair Grove Boys Soccer team is nearing the end of an amazing season with the state tournament approaching.

The boys soccer team’s overall record so far this season is 12-8. They just beat College Heights to take their second ever District Championship, and are headed to Sectionals.

The soccer team has made some big improvements since last season. Soccer player Joshua Orr (12) said, “Well considering last year we only won five games, this year has been a big improvement not only getting more then five wins but having a winning record, as well as having a big shot at winning districts.”

Even though the team is ending the season wonderfully, they had a bit of a rough start, according to head coach Krista Miller. Miller remembered, “We started our season with several players ineligible to play due to missing practices for work and vacations and even a few out for injuries. This gave us a rough start to the year, but once the team was in full force we really kicked it into gear.”

This was Miller’s first year as the boys soccer head coach at Fair Grove. She had very positive things to say about her first year, “I love that they let me be their coach. While I know it was a huge change going from male coaches to a female coach, who is also a preschool teacher, they allowed me to make changes, give direction, and were receptive and respectful to my position.”

There will be five seniors leaving the soccer program this year, so there will be some shoes to fill next year. Miller says there are some incoming freshmen who have been working with Bob Florez that she is excited to have.

Orr had one underclassman in particular that he noticed this year. He mentioned, “I definitely think that Garret Mullis surprised me this year. Last year he dealt with at least three quarantines during the season, so this year in the game he has really stepped up and has been a huge part of our defense.”

Being a part of the soccer team is more than just playing a sport, it can also start new friendships. Orr will be graduating in the spring, he reflected, “I will definitely miss the leadership role and the friendships that I was a part of.”

Miller said, “I see our program continuing to grow and improve at a steady pace. I am very excited to see what lies ahead.”

The boys won the district championship game against College Heights Christian School with an impressive final score of 4-0 and will be advancing to sectionals (the winning team will advance to state final four).