Swinging into the Groove 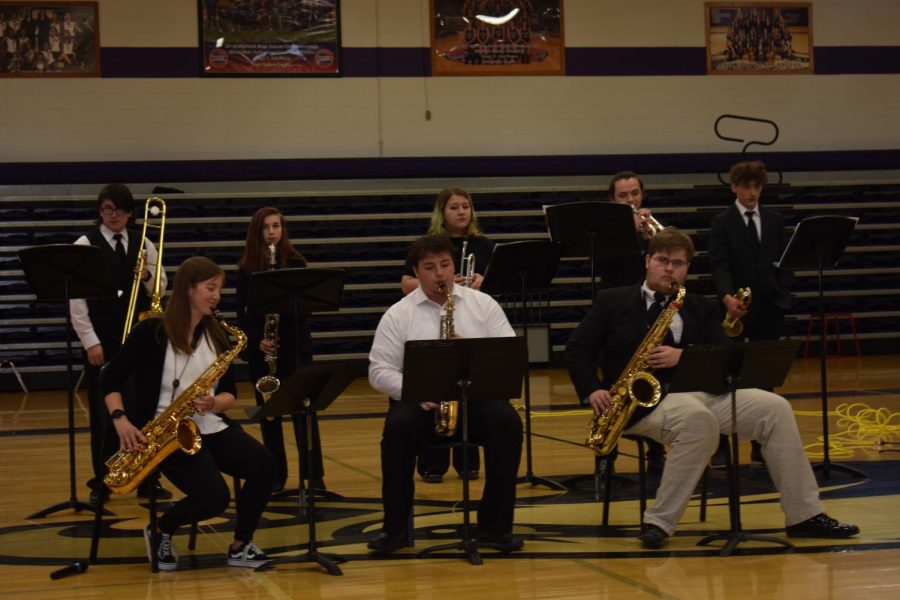 The Fair Grove High School Marching Band’s competitive season has come to an end and now, on Tuesdays and Thursdays, Jazz Band can be found meeting from 3:45-5:30 after school.

The Jazz band has been available for students for the past five years. It originally started as a class however only a couple of students could fit it into their schedules so Natalie Palomo, the band director at Fair Grove, made it an after-school activity. Jazz band is an extracurricular band, meaning it’s not required. The kids in jazz band chose to be there.

Palomo explained, “we can push it to another level in terms of difficulty. They choose to take on this added work and it shows when we pull off a great concert. It’s always fun during rehearsal since everyone just vibes along with our own playing.”

The Jazz band usually will average about 15 kids; this will vary year to year though. When they start meeting it’s still football season, and they have quite a few football players that do jazz, so Palomo usually can not get an official count until 2nd semester. The jazz band is also for 8-12 graders, so the number of middle schoolers interested in it can also change drastically year to year. Palomo shared that she expects there to be between 15-20 this year, but she really doesn’t know.

For jazz band, rehearsal will usually start with a warm up with a blues scale. Then working on some call and response and improvisation stuff, and continuing on with jumping into reading charts for their day. Sometimes the jazz band will sight-read (look at new music), other times they will rehearse music they are sure they are going to perform and clean it up a bit.

The jazz band has not finalized any music yet but has stated that they are likely to play a variety including some swing, blues, rock, pop, and Latin styles. Palomo stated, “It really depends on where the kids are each year and what kind of grooves we like, and what kind of things we need to learn more about.”

In jazz band they have stated that they are planning to work on rehearsals for their evening of jazz, however, Easton Beltz (12), a trumpet player in the jazz band stated, “We plan to possibly observe a few jazz festivals around the area and learn from their success.”

The jazz bands season is from November to late March/early April. At the end of their season, they have an evening of jazz which is a formal dinner and show that they host that showcases all that they have worked on throughout their rehearsals.

Students are able to join jazz band for whatever reason. Beltz, who has been in jazz band since freshmen year, shared, “I am in jazz band because I love jazz music and this is another way to express my appreciation for music.”