We are the (District) Champions 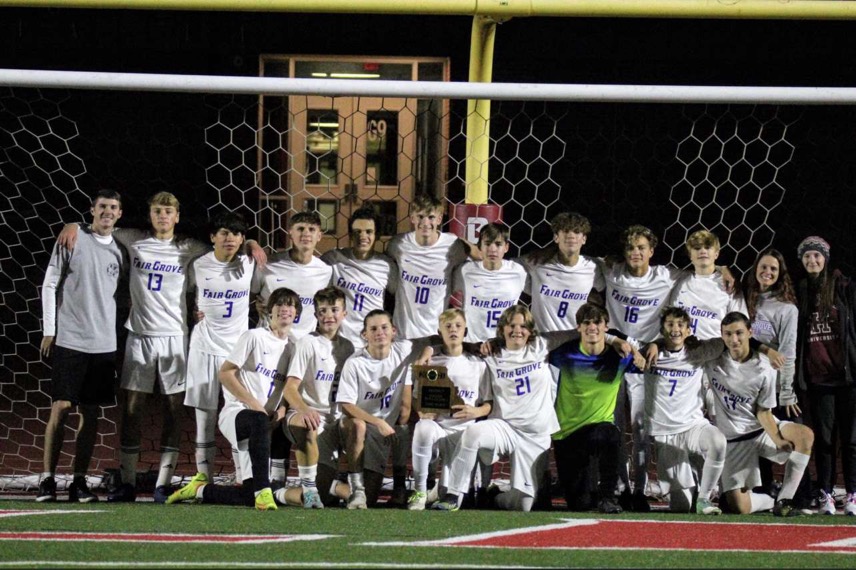 The championship game was played at Carl Junction High School at Five P.M. on November fourth. Fair Grove was the third seed in the district and they had already played the second seed which was New Covenant Academy (NCA). They beat NCA and advanced to the final round of districts where they then faced College Heights. College Heights held the first seed in the district.

Brandon Kandlbinder (10) was on edge leading up to and during the game. He shared, “When I went into the College Heights game, I was severely nervous. We put too much time and effort into this season just to lose in the district championship.” Andrew Shurtz (12) is a captain on the team who was also nervous going into the game. Shurtz explained, “Going into the game against College Heights, I knew it’d be a tough game; I knew we would just have to come out and play hard to win.”

The Fair Grove Soccer Program had another addition this year with head coach Krista Miller stepping in and helping the boys on their journey. Although Miller is a first year coach, she already has a district championship title under her belt. However, she admits that it’s because of the hard work the team put in during the season. “It feels really great, but I know that it is due to the hard work of these boys and the skill and determination they bring to the field,” shared Miller.

A team that is seeded third doesn’t just go in and beat a team that is seeded first. It not only takes a lot of physical effort and determination, but it’s a huge mental game. Each individual player has to be willing to give everything for their team. It also takes a lot of preparation. However, things weren’t looking on the upside for Fair Grove on the preparation side of things. “Truthfully, we unexpectedly had an off week. When trying to review film, we ran into technology issues and even had a game that would have been great practice canceled due to weather,” explained Miller. She went on to say that when they did get the chance to be on the field to practice, they tried to stay positive and work as a unit.

Because the Fair Grove Boys Soccer Team won the district championship title, they are advancing to sectionals against Laquey. Laquey is a team that they played in the regular season. Shurtz explained, “I expect the Laquey game to be a very good and well fought game. If we come out and play our game, then we can definitely win.”

The next stop for the Fair Grove Boys Soccer Team is sectionals, which will be held Saturday, November 13th at Laquey High School at 2:00 pm.