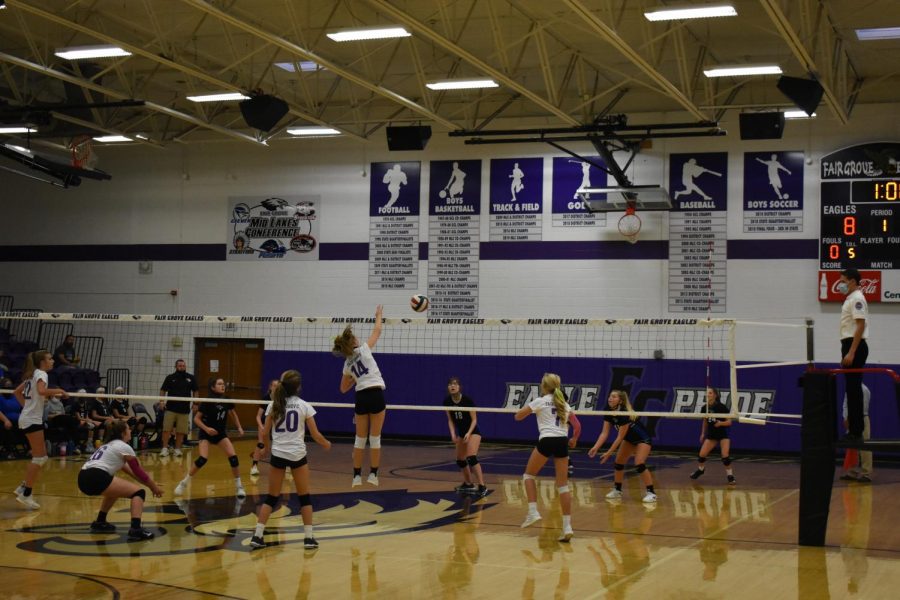 This year’s middle school volleyball season has come to a successful closing, with the 7th grade team finishing 14-0 and the 8th grade team 10-4.

“A few big games were the Clever and Strafford games that we played during the season,” said Haley Stallings, the girls’ coach this season. This was her second year coaching middle school volleyball. Sofee Garrett, an eighth grader, commented on the Strafford game. “Our Strafford game was a big game for us because they are pretty good and it’s an embarrassment losing to them at any time. Luckily we won, but it was a good challenging game.”

Both middle school teams were also MLC champions this season. “The tournament was hard, just like last year. Clever beat us in school ball, but we had our minds set to beat them in the tournament,” said Sofee Garrett. “We were way ahead of Clever that game but when the next set came it went downhill. Luckily, we pulled the win though,” she explained.

Stallings said she believes volleyball is very much a team sport, and the girls have a lot of team bonding memories together. She described just a few, “One memory from this year was the Monday before one of our games when the whole team came to my room. Typically we started slow on Monday’s so I made them come to my room to play Just Dance and karaoke for an hour before we left. We had a good time and a lot of laughs. We also played exceptionally well that night. The other memory that sticks out to me is the bus ride to Skyline. On our way there we played Heads Up the whole bus ride and it was a blast!”

Both the 8th grade and 7th grade teams had eleven players this season, and Stallings says she believes every one of them was crucial to the team’s success. “Volleyball is very much a team sport and you cannot be successful unless you work as a unit and utilize everyone’s talent, from the bench and to the floor.”

Though the team was very successful this season, the girls still have room for improvement moving into next year and into high school.  Stallings elaborated, “I think you can always get better. One thing I would like to improve on is having a sense of urgency regardless of the competition we are playing. It is easy to play down or up to competition in volleyball because it is such an emotional sport. However, I believe it is important to find consistency and have a level of play that does not waver,”