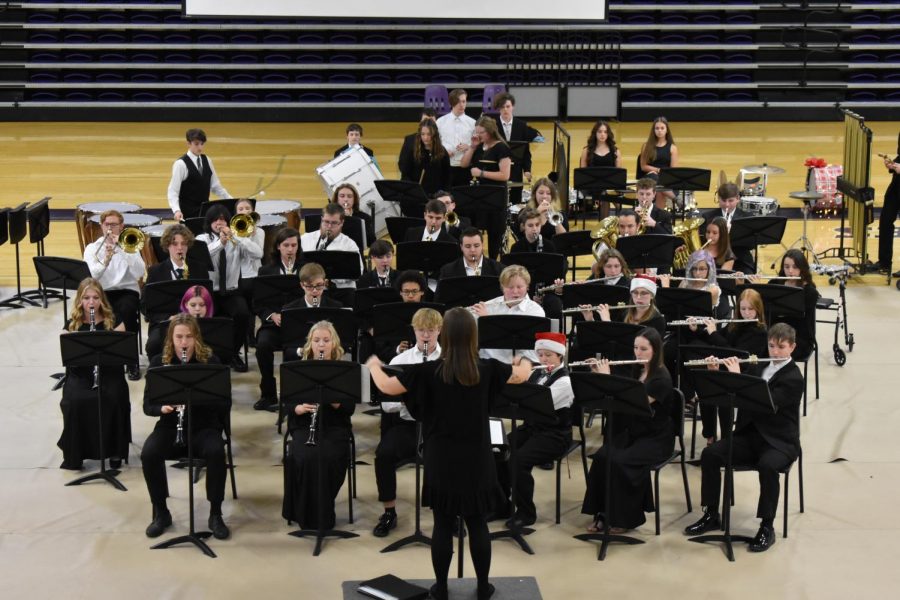 The Fair Grove High School Band at their annual Winter Concert, on 12/9/21.

On Thursday, the 9th of December, the Fair Grove Band had their annual Winter Concert. From 5:30 to 8:30 the bands presented their work on Winter themed pieces.

The winter concert was in the high school gym where each grade level’s band put on their performance for the audience.

Every year the Fair Grove Band has two concerts, a winter concert, and a spring concert. The concerts provide the band students an “end goal,” as well as being a chance to feature their performance skills.

“For me, it helps me become a better player. It impacts me as a player by giving me the opportunity to perform and share my skills with others,’ stated Riley Frazier (9).

Having a concert also lets families and friends see the results of the hard work the band members have been putting in. For the players, “it hones their skills in a way that only the pressure of a public performance can. It can also be a source of pride for them, when they put music together quickly to perform,” informed Mrs. Palomo

“It makes me feel purposeful with my playing and gives me a reason to really try and express myself musically while enjoying getting ready with my friends,” Ivy Wehmeyer (11) went on to say, “It’s pretty impactful because then I focus more on my playing and become more intentional with my time used to play.”

Mrs. Palomo also shared, “My favorite part is probably seeing my beginners perform for the first time, which is a big milestone for those 6th graders. They get so nervous and excited for such a short amount of playing time, and it’s hard to recreate that feeling in the kids ever again as they get more comfortable performing.” For the band kids, the first concert is a big deal.

As the band director, Mrs. Palomo oversees all of the Bands’ progress through the year. She shared that she takes a lot of pride in just being their director. “For all grade levels, it’s hard to put together a concert for a lot of different reasons. This is all my middle schoolers’ first Winter Concert, due to a lot of random circumstances over the last few years, and it’s awesome that I get to see them evolve as they prepare.”