Middle School Play Back at it Again 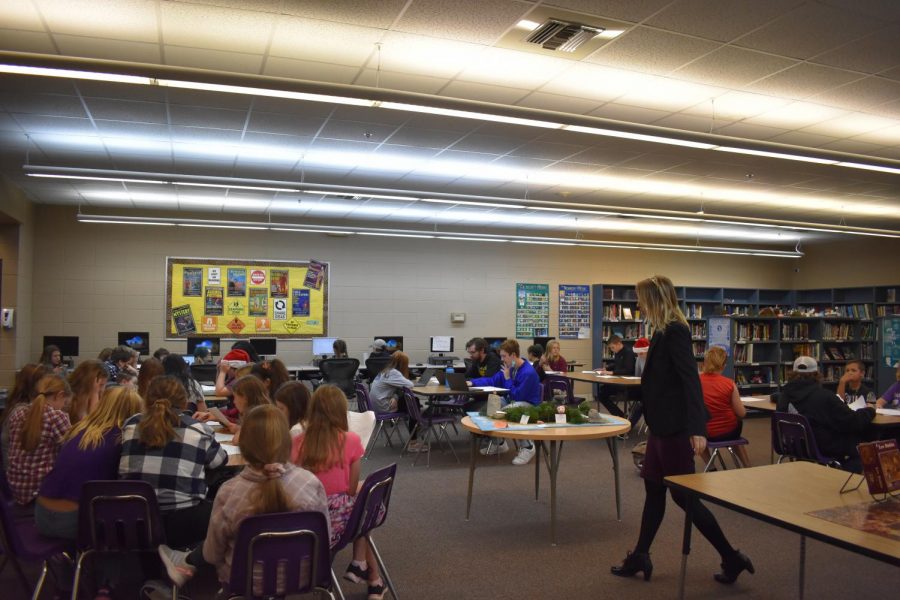 Amy Holland supervising the first script read through with the middle school cast.

This year’s play is going to be structured a little differently than normal. Instead of spending money on buying a script to perform, Amy Holland, the drama teacher at Fair Grove, is having her advanced theatre students write two different plays for the middle schoolers to perform. The play Snow White and the Seven Suspects will be for the 5th and 6th grade while the play Everland Middle School will be for the 7th and 8th graders.

Cooper Zumwalt (11), one of Holland’s advanced theatre students, described his time working on this script, “I spent a lot of time outside of class writing and discussing ideas though, and the 45-minute script was written in about a week. I’m really excited to see our ideas come to life onstage!”

Zumwalt helps out more with the MS theatre department beyond helping write the script. He will also be directing one of the acts of the play. “My co-director, Alex Bates, and I are very excited to work with the young talent within our school and help them not only grow as performers, but as people too,” Zumwalt provided.

He had continued to say that he is “very optimistic for auditions.”  He believes that the middle school has a ton of talent, and that he can’t wait to bring that talent out of them even more in the next couple of months. Alyssa Faubion (8), now playing the role of Jill in the middle school play, talked about the experience beforehand, “Theater is my safe space, so I’m very excited to audition for this years’ play; and I know it’ s going to be fun!”

Keith Nolan (8), has been in the theatre department for 5 years now and stage managed last year’s production of The Best Christmas Pageant Ever. This year, Nolan is stage managing the 5th and 6th grade productions and is playing the role of Peter Pan. He was very ecstatic for auditions to take place simply because, “it is my passion and I feel like it was my calling to act.”

Both of the middle school performances will take place on February 18th and 19th. The time they will start is 7pm in the Fair Grove Elementary gym.