Seniors Grieve the Loss of their Last Chance at Districts 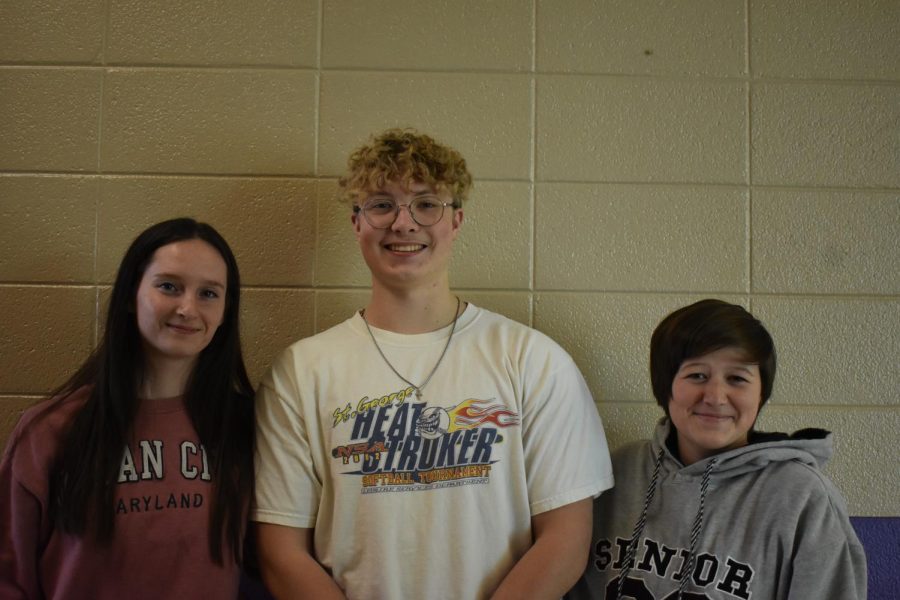 The three seniors who were set to preform in the district concert (from left to right): Zoey Hupman, Nicolas Hamp, Alivia Kimbriel.

Three seniors: Nicolas Hamp, Zoey Hupman, and Alivia Kimbriel were set to perform in the district concert at Central High School on January 22, before the concert was sadly canceled.

The concert had previously been pushed back from January 15th to January 22nd due to weather conditions before canceling altogether. This concert would have been the first time these kids have performed these pieces together; the rehearsal scheduled for Saturday January 8th was canceled due to weather and road conditions as well.

Hupman would have performed in the district concert band, she would have played Ava Maria, The American Red Cross March, When the Spring Rain Begins to Fall, Scramble, and Homage to Bharat.

Hupman would have been performing in the district band for the first time. She stated, “Every other year I have backed out because I was either too scared to audition or I did not work on my piece.”

She was most excited to perform Homage to Bharat because it is so different from anything else she has played. She added, “It’s a piece that explores the sound of India”

Hupman had no idea what to expect. She shared, “In all honesty, I think this is one of the best bands I would have performed in. The students performing in these bands are some of the best in the district. I was excited to be a part of it and I was even more excited to hear what it was going to sound like.”

Hupman prepared for the proformance by practicing every spare minute she had. She explained, “I had to practice because the music is a lot harder than the stuff I would normally play in a regular concert band. But if I wanted the music to sound good I had to be familiar with it. If you play a sport, you don’t just go into your first game without having any practices. It’s the same with the band.”

Kimbriel expected the performance to go rather well. She mentioned, “We would have had the best high school musicians in the district. I was excited to play with new people and should have known a few of them who I used to go to school with. If they had been practicing consistently it should have gone smoothly. If not, it would have been hard to make up for lost time because we would have played challenging pieces.”

Although you will unfortunately not be able to watch these talented seniors perform in the district concert, you can find one of many Fair Grove Bands playing at assemblies, basketball games, and ‘Evening of Jazz’ (hosted by the band boosters) on March 26, 2022.