Jazz Band and Choir Play the Night Away 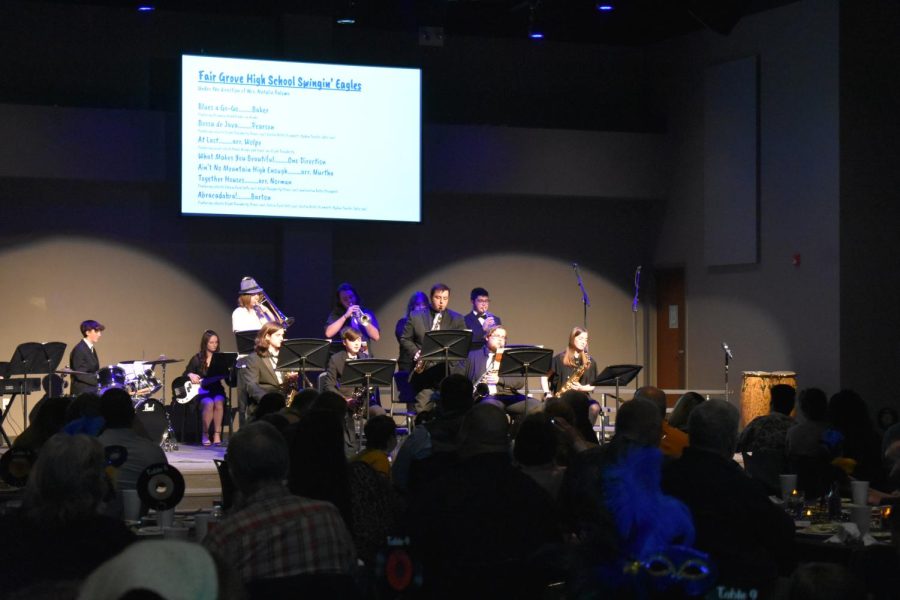 The Fair Grove Jazz Band is a place for musical players at Fair Grove to branch out to another genre of music opposed to normal band classes. Jazz Band is led by Band Director Natalie Palomo. Palomo has run the jazz program for as long as she has taught at Fair Grove, which is up to five consecutive years now. Palomo stated, “Jazz music is such a lively, personal type of performance. The players have to really let their emotions and soul through so you can make the music as invigorating for the audience as possible. When improvising especially, you have to be able to think musically while making it up but also think about what kind of vibe you’re going for with the solo, which can be challenging.”

The format of the concert is a “dinner and a show.” Palomo shared, “Audience members arrive and are served their food before the concert begins. Then the jazz band will play their set, followed by a brief intermission to clear out tables. The choir then sings as well, and we close with a piece both groups perform together. It’s probably the most high energy, interactive concert we put on.”

Audra Harmon, the middle and high school choir teacher, loves the Evening of Jazz. “It is one of my favorite concerts of the year. I love that we get to work on songs that aren’t your standard choir songs and that we get a chance to really perform,” Harmon explained. “Choir music can sometimes feel stuffy, but the Evening of Jazz gives us an opportunity to really have some fun.” Both the Jazz Band and Choir gave students of many different ages a chance to experience preforming jazz pieces.

In Jazz Band, there are currently four 8th graders, those being Keith Nolan (8), Jesse Eliston (8), Gavin Brock (8), and Lee Van Cleave (8). Harmon revealed, “Most of the choir that sang was 8th grade, and the majority of those were singing in their first concert. I was very proud of them for not backing down to the challenge and being able to overcome their nervousness.” By allowing students from eighth grade instead of just high school, the Jazz Band and Choir have more performers to perform their songs.

When describing the experience of being in Jazz Band Jesse, Eliston voiced, “Playing with highschoolers has been a very fun experience. Seeing how they interact with each other and how they interact with Palomo has been a great time.” Eliston continues to explain, “The interesting things they do and the things they say have helped keep Jazz band fun and engaging, other than just playing music.”

Everyone’s experience with joining Jazz Band and their experience with their instrument are all different. Elliston conveyed, “My mother was an electric organ player and transitioned into playing piano when she was younger. As I grew a little older I would go to Japan over the summers to visit my grandparents and my mom would put me through piano lessons from her former teachers.” Mackenzie Cavin (10) added, “I had a little bit of experience in jazz my 8th grade year, but started it full time my freshman year. So, about two years.”

In the second half of the show, the Jazz Choir sang Choo Choo Ch’Boogie, It’s All Right, Sing Together, Be a Light, and River of Dreams. The choir also sang Beyond the Sea while the band played along.

This program has become a well known opportunity across the band students. “Palomo would always bring up the Evening of Jazz at around the same time every year, telling us if we wanted to we could buy tickets. She talked about it enough that I was eventually curious about it and wanted to join,” mentioned Mackenzie Cavin. The overall demand to go and see the ‘Evening of Jazz’  has been apparent with 120 seats being available and completely selling out within 3 days. “I expect the performance to be amazing. The kids have pushed so hard, and worked so hard, and it just sounds great during our rehearsals. I’m really excited to share that with the attendees,” shared Palomo.