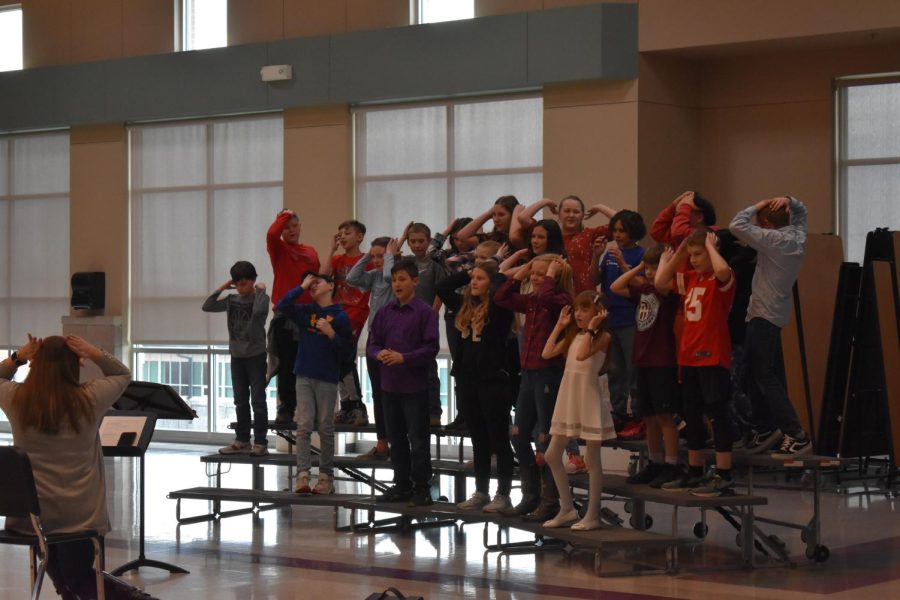 On March eighth, Audra Harmon’s fifth grade class put on the program Destination America: A Coast to Coast Musical Tribute to celebrate an end to their third quarter hard work.

Every quarter in Harmon’s fifth grade class, the students will prepare a musical to present at the end of the quarter. Students are involved in several other programs throughout elementary school but the middle school productions are a different ball game. These programs range from a variety of genres but this performance was a tribute to America’s different musical traditions and styles. “The performance was called Destination America: A Coast to Coast Musical Tribute. It is a musical revue celebrating all of the styles of American Music,” Harmon stated.

Students, staff, and parents enjoy watching the programs. Nobody more so than the middle school secretary Tina Cantwell. Cantwell explained, “I have to say, one of the perks of my job is having a front-row seat to our 5th grade performances… I always enjoy them immensely and it’s awesome to see how excited and proud the parents are!”

With all show stopping performances, there are show starting performers. Keira Marion-Swan (5) was a student within the program. The young actress detailed her experience with Destination America: A Coast to Coast Musical Tribute. Marion-Swan stated, “My favorite part was how much excitement and energy everyone had.” So much energy was brought that the students had the crowd going wild and it blew Cantwell away. Cantwell described, “The kids did an amazing job at switching between the differing themes and they really put a lot of energy and enthusiasm into their presentation.”

The Fair Grove music program hasn’t always presented programs like Destination America: A Coast to Coast Musical Tribute. These types of musical programs first debuted during Harmon’s 2017 summer school course. “I started with summer school musicals in the summer of 2017. Then in the fall of 2017 was the first official year that we performed musicals as my curriculum for that class,” Harmon described. Harmon has put on nearly 20 performances with different fifth grade groups.

As any performer knows, the key to a successful show is hard work and dedication. Marion-Swan gave thanks to her cast mate’s hard work. She exclaimed, “Everyone in it worked really super hard and deserved a million trophies.” As the fourth quarter begins, the next batch of fifth graders are beginning to prepare for another outstanding performance.