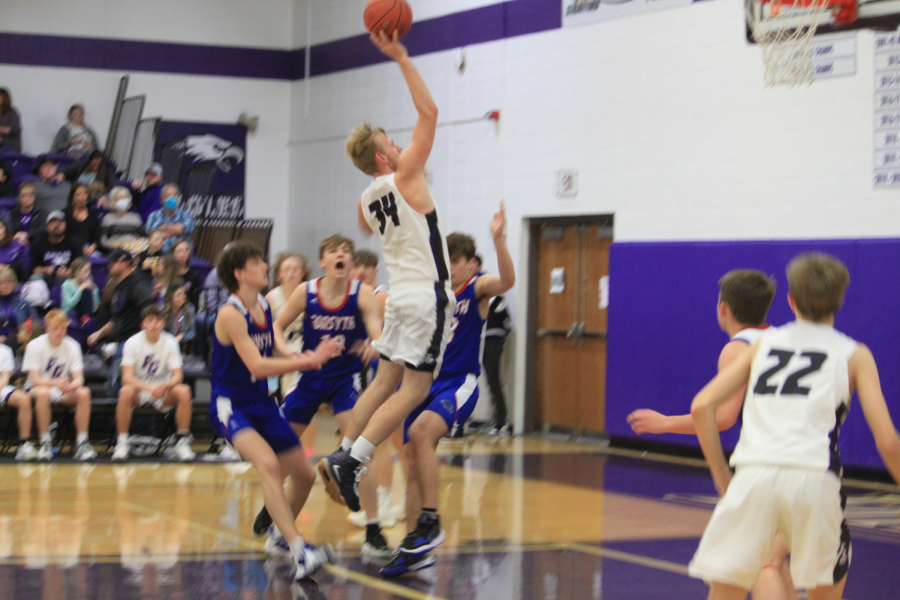 Jacob Carr going up for a shot at the 2/11 basketball game against Forsyth (photo taken by Fair Grove Newspaper).

The Fair Grove Boys and Girls Basketball Teams’ seasons have come to an end, and it’s time to take a look back on their successes and losses.

Kameron Green (11) plays varsity for the girls’ basketball team. Green feels good about this past season, even though they had their rough times due to their team being so young. As the season went on, the girls were learning to work and play as a team.

Green made 2nd team for the 2022 All-Mid Lakes Conference Girls Basketball Team, and Brooke Daniels (9) made the honorable mentions list.

Brooke Daniels said, “This basketball season was awesome. We made it to the district championship game and fell short. However, this experience is going to fuel us for the next season and make us want it that much more. We had a really good overall season, but there is always room for improvement.”

Bryden Baxter (9) is a freshman that plays football and basketball. Baxter got some good varsity playing time this season. Baxter announced, “I enjoyed this season riding the buses to away games and the locker room talks before games and playing with my boys.”

Some of the girls are disappointed with the end of their season. Brooke Daniels shared, “I was super upset that the season ended. This season we had a single senior, Bradi Weaver. Bradi was such an amazing role model and leader for our team. Bradi brought so much energy and positivity to the team. She set the tone in the gym and made everyone better. Bradi is a teammate that is hard to replace.”

Brooke Daniels is excited about her high school basketball career. She proclaimed, “Well my career just started, but I think it had a great start. I’ve played basketball ever since I was little, so it’s always been my favorite sport. Basketball has always been the sport that I can just play and relax and not think about what’s going on outside of it.”

The girls and boys basketball season has come to an end and the players have to give reluctant goodbyes to the seniors, according to Green.