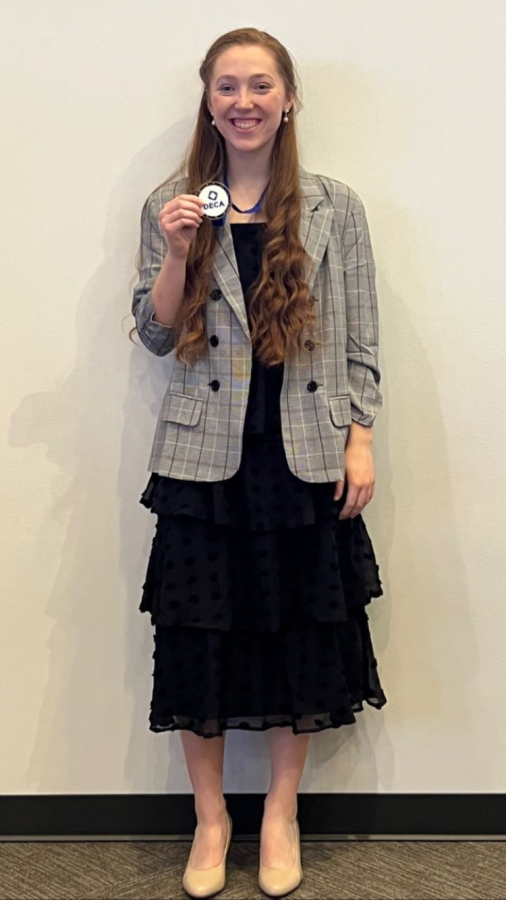 Allison Findley, who was featured for the Buffalo Reflex, at a recent DECA competition. Photo provided by Findley.

The Buffalo Reflex, a local newspaper, highlights the success of students from Fair Grove, Skyline, and Buffalo through their Academic Achievers program.

Paul Campbell has worked with the Buffalo Reflex for 17 years. He was the owner for 15 years and recently retired to work part-time. He stated that the purpose of this program is to feature students who not only make good grades but are also active members of their school communities.

“The program started when I owned The Platte County Citizen Newspaper in Platte City for 13 years. We had instituted our Athlete of the Week program, and a couple of parents suggested that we also should recognize kids who achieve academically,” Campbell shared. Hearing this advice, he started the Academic Achievers program and carried it over to the Buffalo Reflex when he began working there.

At Fair Grove, Tonya Peck, the high school counselor, sends a list to Campbell, based on student GPA and class rank. “Usually we get pictures of six or seven achievers at a time when I come down, and I ask each one what activities or sports they are involved in,” Campbell explained. Each student’s GPA is also included in their feature.

Allison Findley (10), was recently featured in the newspaper. She was asked about her extracurricular activities and then had her photo taken for her feature. Findley is involved in basketball, volleyball, GPD, and DECA, and she believes recognizing hard working students is important.

Isaac Walters (10), is involved in track, cross country, basketball, SADD, and STUCO, and was also featured in the newspaper this year. He says his success in school is important to him because he is planning to go to medical school and he wants a secure job in the future.

“I think it is very important to highlight student achievements because it gives them a sense of gratification, and so that our teachers and peers see the work that we are putting in,” Walters said. He also mentioned how it is difficult to keep up with school when you are involved in so many other activities so it’s important to give credit to those who put in this type of effort.

Paul Campbell enjoys working with the kids in this area. He commented, “These school districts are really effective in teaching the kids to achieve academically and how to approach life in general. There are many school districts in the country that can’t say that.”