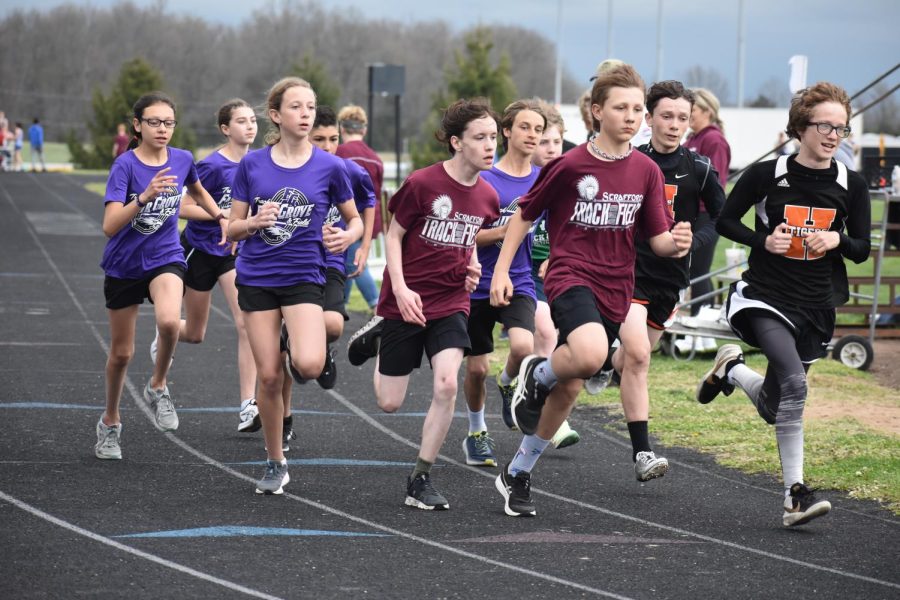 After a recent start to the 2022 Fair Grove Middle School Track and Field season, the team is putting in the hours to compete against different schools at their upcoming track meets.

The team is coached by Kayla Holt, who has trained track and field athletes for seven years, two of which at Fair Grove. Alongside Holt, Marc Green, the Fair Grove Middle School principal, also prepares them for their meets. Middle School Track is open to seventh and eighth graders who want to get a head start to the high school version of the sport.

The team practices everyday after school in different areas of the track. Usually, they will all split up with individual coaches to help them in their specific event. The events are the 4×4 , 4×1, and 4×2 relay, the 100, 200, 400, and 800 meter dash, the 1600 meter run, shot put, discus, high jump, pole vaulting, long jump, and triple jump, and finally the 100 meter hurdles. Holt stated, “The team’s chemistry makes practices move smoother than expected. We all support and push each other to be better than the day before.”

Eighth graders on the team gives the chance for coaches to help the inexperienced out a little more. Holt explained, “Although we don’t have any team captains, we have several kids that are taking on leadership roles in various ways. Track and Field can be a curious act with lots of events all happening at once. Having athlete leaders that can be our mini-coaches while Coach Green and I are in various places is very helpful.”

Sage Crowley (7) is a recent newcomer to middle school track. Sage participates in the 100 meter dash, the 200 meter dash, and the 4×1 relay. Crowley expressed, “I really enjoy track. Some of my best memories are being made when we go to other schools for track meets. I love my team and we all have respect for one another. They drive me to be faster everyday in practice.”

After just about midway through the season, middle school field and track still has room to improve for the last meets of their regular season, though the eighth grade boys were fortunate enough to take home 1st place in the 4×4 at several meets they’ve attended.

The next meets will take place at Fair Grove (hosted) on April 27 and at Strafford on May 2.