Band and Choir’s Adventure to Music in the Parks 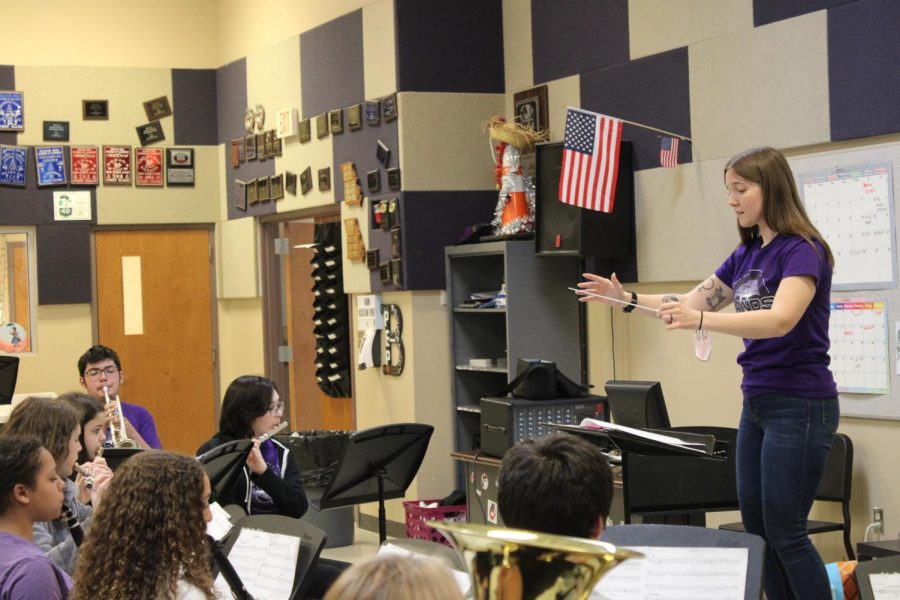 The 8th grade band rehearsing before leaving for the Music in the Parks competition. Photo taken by Easton Beltz (12).

During the weekend of April 22nd, both the Fair Grove 8th Grade Band and the Fair Grove Choir performed at the Silver Dollar City Music Festival, Music in the Parks.

Every spring, one of Branson, Missouri’s theme parks, Silver Dollar City, becomes host to a music festival. Bands, choirs, and other music ensembles from around the area come to perform in a shot of winning an assortment of awards. This year both the Fair Grove 8th Grade Band and Fair Grove Choir attended the festival for the first time.

The 8th-grade band is under the direction of the Fair Grove Band Director Natalie Palomo. Palomo has been teaching at Fair Grove for 5 years and this was her first year taking a middle school band to a festival like this. Palomo detailed her feelings going into the performance. “I’m excited to get a middle school group out in this capacity, it’s unlike any other concert experience and will be a new challenge for a skilled group of 8th graders,” Palomo exclaimed.

The band performed on Friday night and enjoyed the park all day Saturday while the choir performed. The band performed Big Circus March and Irish Song while the choir performed Soon I Will Be Done and An Irish Blessing. Keith Nolan (8) is in both the band and choir programs and performed with each group. Confidence is key with any performance and Nolan had high expectations for the festival. “I think the performance and competition will go amazing. We have wonderful musicians in every way,” Nolan explained.

Preparing for any large event like this takes mass amounts of hard work, dedication, and persistence. Palomo detailed how both sides of the music department have been preparing and perfecting their pieces for Music in the Parks. Both groups have been working since the beginning of the second semester.

When outside of rehearsal it is important for individual performers to study certain sections that might trip them up personally. Nolan has been working hard at work, bettering himself for this event. Nolan explained, “I have personally practiced at home and worked on different exercises to ensure that I will do the best that I can.”

Music in the Parks was the second to last performance of both programs this school year. The 8th grade band placed third in the Class A Middle School Band division and the 8th/high school choir placed first in the Class A High School Choir division.