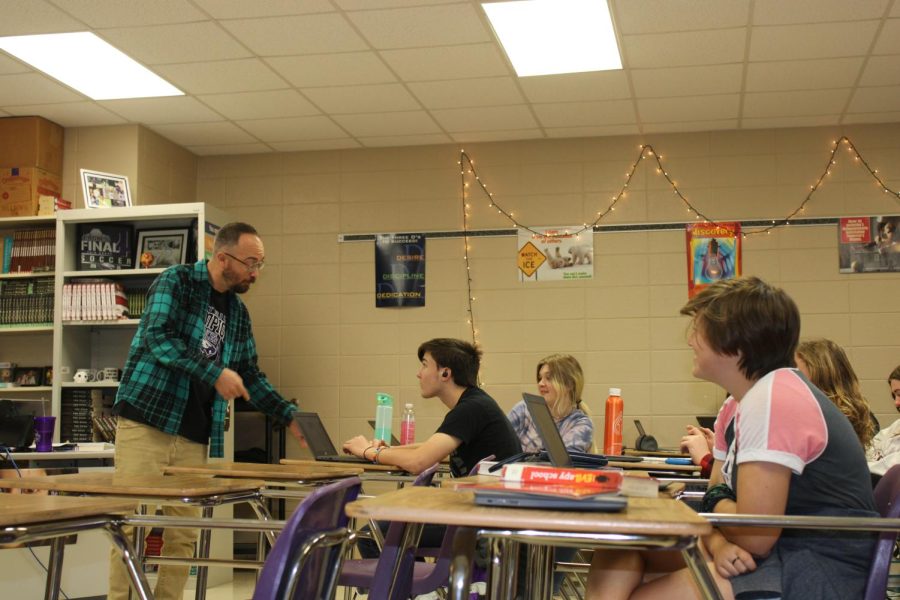 Joseph Florez is an English teacher at Fair Grove High School who runs several interesting writing programs and is involved in the community.

Florez has been a teacher for eleven years, and ten of those have been here at Fair Grove. He described, “It’s definitely one of the best schools in the area, both for students and also for teachers. It’s a good place to teach- our students are way more well behaved than my previous district, and most of them are truly trying their best in the classroom.” Florez is also a fan of the four day school week that Fair Grove Schools provides. In 2019, he was named Fair Grove High School’s Teacher of the Year.

Florez’s class schedule includes English I, Newspaper, and Modern Novels/Creative Writing. Modern Novels/Creative Writing is a class that he personally created for the English program. The Newspaper class is student ran and organized by Florez. English I is a required course for freshmen to take, so nearly every FGHS student has at least one class with Florez during their time in high school.

“…I love the things I teach: novels like To Kill a Mockingbird and The Outsiders are classics, Newspaper is a ton of fun and teaches so many soft skills, and Modern Novels is a great opportunity for students to read something that they’ll really enjoy,” Florez said.

One of the students who took Florez’s English I class this year was Karlee Marion-Swan (9). Marion-Swan reminisced, “My first thoughts when I entered Florez’s classroom for the first time was oh my goodness, I am going to fail this class because I had heard rumors that his class was the hardest out of all of my classes.” Marion-Swan continued, “Most of my peers like Florez and think that he is a great teacher. They also say they love that Florez has a good sense of humor that kind of lightens the room.”

Florez hosts Poetry Club after school on Wednesdays. This is a club where students can write, share, and read poetry. No one is required to share what they write, so quietly sitting in the back is a completely welcomed way to attend. Katherine Burch (12), a member of poetry club, shared, “I think [Florez] is very open and willing to share his own poetry…and that helps us feel very comfortable.” Florez said that students can find their place at Poetry Club and that its a way he can encourage writing with his students.

Apart from his teaching career, Florez coached eight years of soccer at Fair Grove High School before leaving the high school soccer program. He actually helped build the first soccer team for the school. During that time, he was the 2019 Missouri Class One Public School Coach of the Year and the boys team has now been to state twice over a 10 year span. He still helps coach his kids, ages three and five, in soccer. “I like to say that I went from coaching in the Final our, to coaching four-year-olds,” Florez joked. “There’s nothing like going from coaching all-state level players in the final four, to having a three-year-old decide that they know more than you- but at the same time if I was still coaching, I would’ve been at a soccer tournament instead of being on the field when both my son and daughter scored their first goals.” Florez is glad to have made memories coaching soccer in both his pre-school and high school coaching careers.

Outside of school, Florez enjoys traveling with his wife. Their most recent trips were a beach trip in North Carolina and a New Years Eve trip to New Orleans. They also enjoy going to concerts. Florez said, “In a normal year, we see somewhere between 50-100 bands as well, traveling a lot to Fayetteville, Tulsa, KC, and St. Louis for concerts and festivals.” Along with traveling and concerts, they like to go to sporting events.