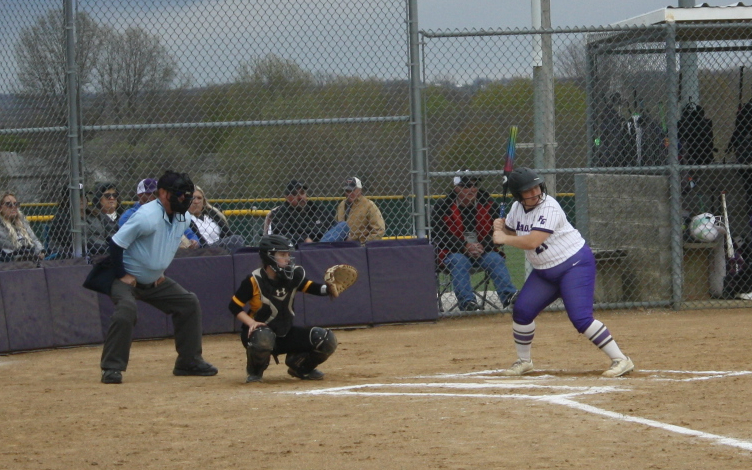 Bradi Weaver ready to bat during the game against Pleasant Hope on April 19, 2022 (photo by Savannah Ipock).

Softball across Missouri is beginning to wrap up for the 2021-2022 season with the first round of Districts beginning for the Lady Eagles on May 7th at Pleasant Hope.

As the end of the school year begins to come to a close, sports begin to start district competition. The Lady Eagles Softball Team’s season started in early March, playing in the Jamboree held at Ash Grove. The season has been a fruitful one, leading up to the district games with a 10-8 record going into Class 2 competition. Fair Grove High School Softball Coach Tara Whetzell delved deeper into the team’s success this season, “This season has been a competitive season for us. We are competing against teams that we had no chance of competing with last season. As a coach, it’s very rewarding knowing our off seasons and the extra work our athletes are putting in on their own is paying off.”

Preparation is key in any sort of competition, especially at the district level. Faith Klindworth (10) has been working diligently to prepare herself and her team. Klindworth stated, “To prepare for the upcoming games we have been fine tuning our mechanics and working as hard as ever.”

With hard work and dedication being no stranger to the FG Softball team, the district games could go either way. Whetzell described, “I feel very confident going into districts. We have beat three teams and lost to three teams in our district. The three teams we have lost to were very close scoring games. We have a talented and hardworking group of girls and they are very capable of making things happen in districts.”

As the group realizes that both the school year and season are coming to an end, they reflect on the successes of the season. Both Whetzell and Klindworth explained the monumental victory over the Strafford Lady Indians Softball team on April 4th. This game was the first game that the Lady Eagles have defeated Strafford in seven years with a final score of 4-3.

This season has been a very memorable season for the ladies with their monumental victory against Strafford and a great track record of 10-8 this season.

The team won their first district game, but lost their second against Pleasant Hope 1-0.