The Song of Spring 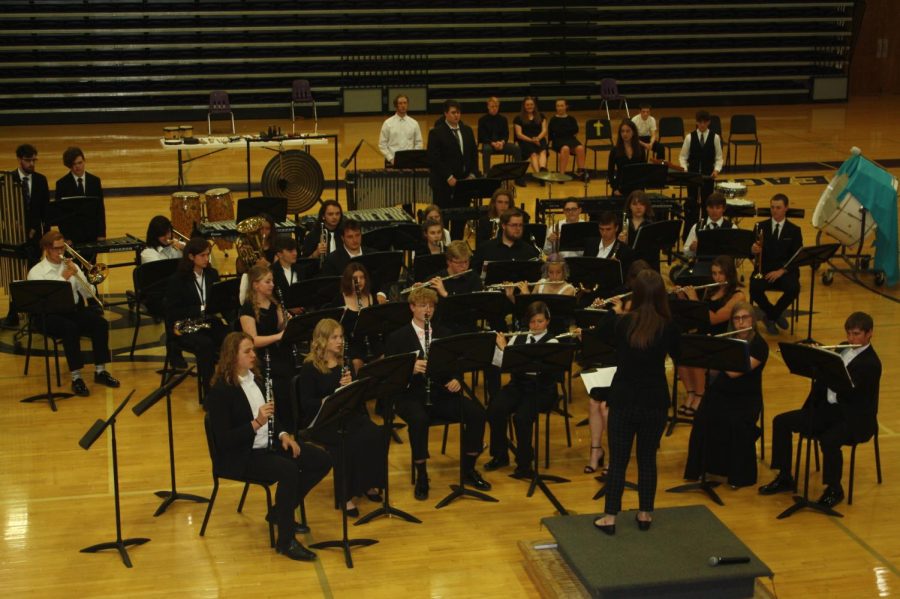 On Thursday, May 5th, the Fair Grove High School Concert Band had their annual Spring Concert. The concert began at 7 PM and lasted about an hour and a half.

High School Band Director Natalie Palomo and the Concert Band had been preparing for this concert every day in first hour for some time.

Before the concert occurred, Palomo expressed, “I’m really excited for a piece called Flash in the Pan! because it’s a little weird, super energetic, and has cool parts for just about everyone. I think it’ll be entertaining for an audience whether they “know music” or not, and the kids seem to enjoy playing it. I’m also excited to be playing Psalm 42 again, as a senior feature, because it is so beautiful to hear just the seniors play together for the last time.”

Annabelle Hart (10) reflected on how the spring band concert went for her personally. “I play the baritone, and I feel like we performed very well. It’s always so fun getting to show our parents, and friends all that we’ve worked on for a long time. It takes a lot of time and practice,” Hart explained. “Mrs. Palomo has put so much effort into each student in the band, and the band itself. I can speak for all of us and say that we are so grateful for her hard work and dedication.”

The spring band concert had a very fun twist to it; the School Resource Officer, Officer Brandon Bond, was able to direct one of the songs, Donzalatina.

With the end of the school year coming to a close, Palomo explained what this year’s Fair Grove Band has meant to her, “This group plays with such energy in all that they do, and I don’t know if we’ve had a more expressive group in slower, more lyrical sections, which makes emotional music even more powerful. They are so friendly toward each other and you can hear their blending in the music through that. One of my favorite memories from teaching at Fair Grove most recently is when, at the end of marching season this year, we placed and qualified for finals after what was a mentally exhausting season for a lot of it. I happened to turn around to look at the kids as they announced our name and the shock and joy that they had on their faces just made every early morning and late night worth it.”