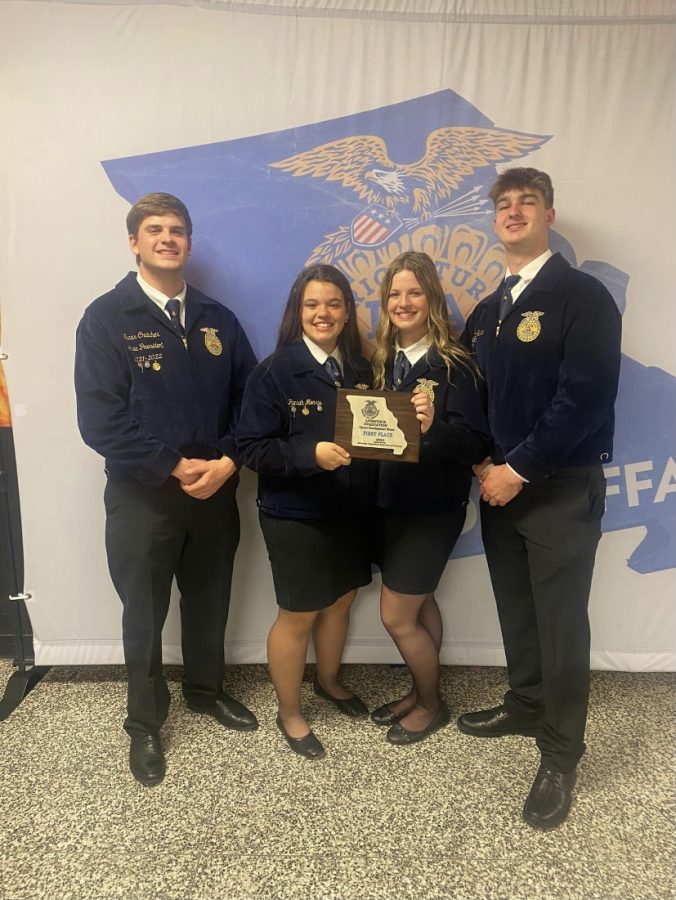 On Thursday, April 21st, the Fair Grove Future Farmers of America (FFA) livestock judging team won state and are now on their way to nationals.

Several FFA teams traveled to Columbia, Missouri to go to the Trowbridge Livestock Center for State Contest on Wednesday, April 20th. On the 21st, three teams competed: the livestock judging team, the meats team, and the dairy cattle team.

All of the teams had successful seasons. They made it to state and earned very valuable experiences. Chloe Reynaud (12) was a part of the meats team. She shared, “I enjoyed everything about the experience at state! I loved every single classmate that got to go on this trip. It was mostly seniors so our Ag teachers got to be more relaxed and have fun with us. I enjoyed the state convention experience because I had never been to one before. There were over 9,000 people in attendance. We got to hear awesome speakers, watch people get awards they have worked so hard for, and even the fun events that the state convention has to offer.” She continued, “Competing at state will be an experience I will never forget and a goal I will push everyone to try and achieve! FFA overall has taught me so much over these years and has such much to offer every single student.”

Another member of FFA that enjoyed their experience was Taylor Rode (11). Rode was on the livestock judging team and gained a lot of experiences that she will take with her into senior year. She shared, “I really enjoyed the experience. All of us on the team have been working on this for years and it had all built up to that moment and though it was stressful, there was a calmness I carried with me which was like nothing I had ever experienced before. It was also unforgettable when we walked across the stage at the convention to accept our award.”

The teams spent multiple hours practicing in order for them to have the outcome they did. Reynaud shared, “We would study in the 5th and 8th hour everyday, take note cards home to study, go over contests so we are able to understand and fix our mistakes early on. I believed we performed to the best of our abilities every single contest to represent pride for our school, for our FFA chapter, for ourselves, and most importantly for the pride of our team.”

Because of the hard work and dedication that was put in throughout the season, the livestock judging team, consisting of Brett Sartin (11), Lucas Crutcher (12), Hannah Morris (11), and Taylor Rode (11), is on their way to nationals. Rode explained, “At the state competition my team was very successful and we placed first in the contest out of 60 teams,” she continued, “Because we won, we are now training for the national contest which will take place in Indianapolis. I think after state it will be very important to walk into the contest with more confidence.”

National Contest will take place at the end of October, and the livestock judging team will be competing.