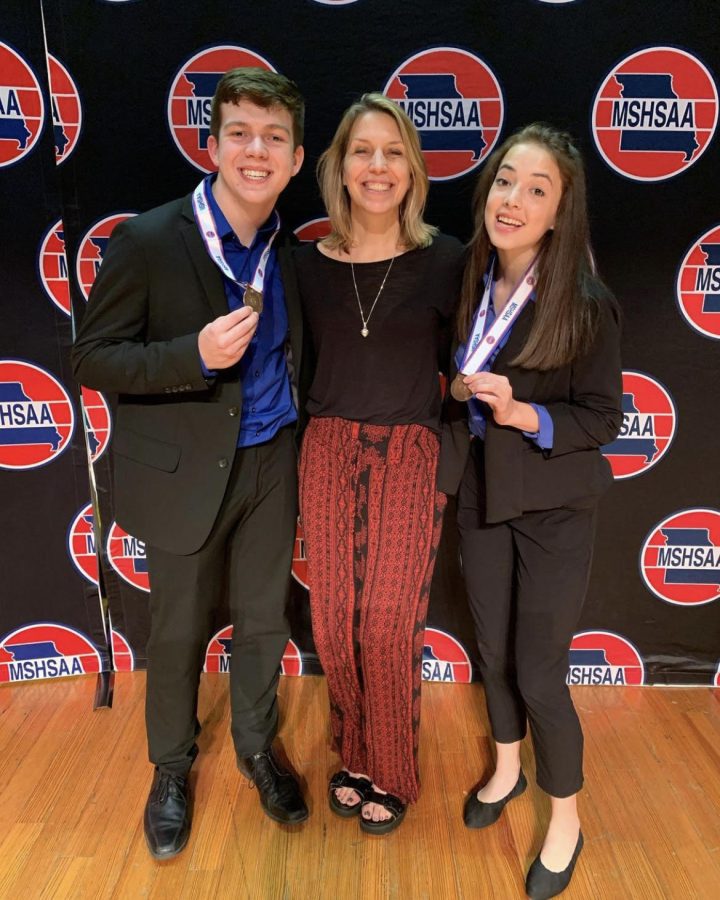 June 12th through 17th, two of Fair Grove High Schools’ top Speech and debate students are going to Nationals in Louisville, Kentucky. Cooper Zumwalt (11) and Stephanie Dunham (10)  have accomplished something that very few people get to.

Mid-June Zumwalt and Dunham will travel to Louisville, Kentucky to compete in the National Speech and Debate Association National Tournament. Dunham explains, “You have to be within the top 4% in the nation in order to be able to compete in the NSDA (National Speech & Debate Association) National Tournament.” Continuing, Dunham shares the path the pair took in order to qualify: “We have a district tournament where if you win the top 3 in the tournament for your event then you will qualify for the national tournament. If you don’t qualify at the tournament there [is a] last chance qualifiers tournament online with people from across the country, and the top 8 in their event will now qualify for nationals.”

Zumwalt shares that the origins of this year’s competitive path are simple, but the growth and reception of their presentation has been very fulfilling. “I’m most proud of how far we’ve come from the start of the year. We started this year by picking up some random script called “Angie” off of Holland’s shelf, and to see how far it has come is insane.”

The reception the two have had in competition is not luck, however. Dunham explains “Me and Cooper have heavily prepared for this event. We have put in countless hours working together whether it be at tournaments all day long together working on our piece or rehearsing in his living room. Half the time we do most of the work outside of Mrs. Holland’s classroom during 2nd hour (Speech & Debate).” Zumwalt states “We’ve prepared for nationals all season long by continuously practicing, polishing, and seeking out ways to improve our presentation. However, it is important to note that this is a non-stop process and that we’ve most likely put 70+ hours into our piece.”

What drives these two when it comes to their passion for Speech and Debate? For Zumwalt, “My favorite part of Speech and Debate is having the opportunity to share stories that are important to me. Additionally, seeing other’s interpretations of their scripts is also entertaining. There are so many ways you can say one line, and unlocking all of those possibilities is exciting to watch.”

Along with Zumwalt, Dunham shares “My favorite part of Speech and Debate would probably have to be whenever we are on the stage and the pure joy you experience and the thrill of not hearing your name called and knowing that you are placing higher and higher. It’s an amazing feeling to know that all of your work is beginning to finally pay off. I would have to say I am definitely most proud of being the youngest person to make it to finals at state in our school for speech let alone receiving 4th place when previously our school has only received 8th. Even now going to nationals at 15 years old.”

Now that the duo has secured their spots in the competition, they wait for the day to arrive. While they are excited there are some nerves accompanying their excitement. Zumwalt conveys his mixed emotions – “I’m a little bit nervous about the level of competition that will be present there. Everyone has fought for their spot, so the thought of there not being any slack is a little scary. However, I’m excited to see how we do! I’m most excited about meeting all the other teams and hearing what messages are important to them. We’ve reached the top, and I’m excited to see what the other teams have prepared alongside us.”

Dunham and Zumwalt will compete together in a Duo Interpretation. They will also be able to compete individually should they not advance in their paired presentation, Dunham participating in Poetry Reading and Original Spoken Word Poetry. Zumwalt will potentially participate in Prose Reading and Expository Speaking.

Nationals are not just an experience. Other than being named the best, some potential prizes for the event include scholarships, other recognition awards, and a trophy.