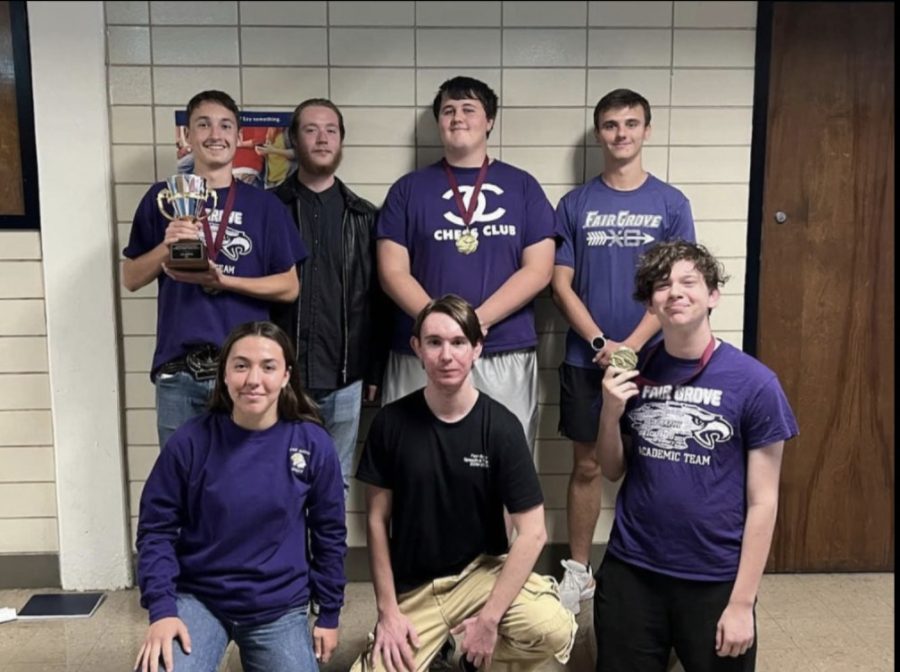 The Fair Grove High School Scholar Bowl team attended their first tournament of the season at Glendale High School, October 15th, 2022. The A Team took first overall and the B team took third.

Fair Grove’s Varsity Scholar Bowl ended last year placing fourth in Nationals. With that being said, the team has set high expectations for themselves. After winning State two years ago, and taking fourth at Nationals last year, they have goals to perform the same way this year.

Scholar Bowl coach Michelle Wahlquist stated, “We have set high goals for this season. Our varsity wants another State Championship, and I believe it is an attainable goal. We’ve been building up to this season and winning a major big school tournament and even a national title at the National Small School Championships in April is within reach.”

Braden Booth (12) shared his biggest personal goal as being his point average per game, “My biggest goal this year is to average 180 points per game. My previous record is 136, so I think this is obtainable.”

Preparation for this season has been going on all year around. According to Booth, “Our varsity team practices all year round. So really, we’re always preparing by reading past questions, watching youtube videos and reading books.”

Coach Wahlquist explains the hard work and dedication that this team has proven they have, “We have multiple weekly practices but the real key is that players work on their own time. They practice on old question packets, online live sites, watch videos and read synopses of material.”

Coach Wahlquist shares how confident she is with the team this year, “I believe we will be even stronger this season with the addition of some talented players grades 9-12. We lost some seniors who were strong in specialty areas, but we are working with our new players to strengthen those areas of weakness. Our returning varsity players of Braden Booth (12), Christian Allen (12), Charlie Harp (11), and Luc Deeds (12) have really been working to broaden their skill base since last May and help our new players learn the process,”

This season will be the last one having the Fair Grove Scholar Bowl team that has tremendously improved our program. Seniors Braden Booth, Luc Deeds, and Christian Allen will be graduating.

Wahlquist stated,  “I am really excited for this season. I guess I will somewhat “fear” seeing the season end. Our seniors have really defined our program and moved it into the upper level of quiz bowl competition.”

Booth shares his hopes and dreams for Scholar Bowl for him in the future, “I absolutely plan on playing in college.” He continued, “ I have already been offered a spot on a couple of different varsity teams, and I hope that I can make varsity wherever I go. Outside of college, I hope to go on Jeopardy at some point, as well as play some open tournaments.”

Not only did they take first as a team but in individual competitions. Braden Booth took first place, Charlie Harp placed third, and Christian Allen took fifth .

The Scholar Bowls team’s next tournament is on October 29th, hosted at Houston High School. Fair Grove school will also be hosting their own tournament on Saturday November 19th and are looking for readers and scorekeepers.