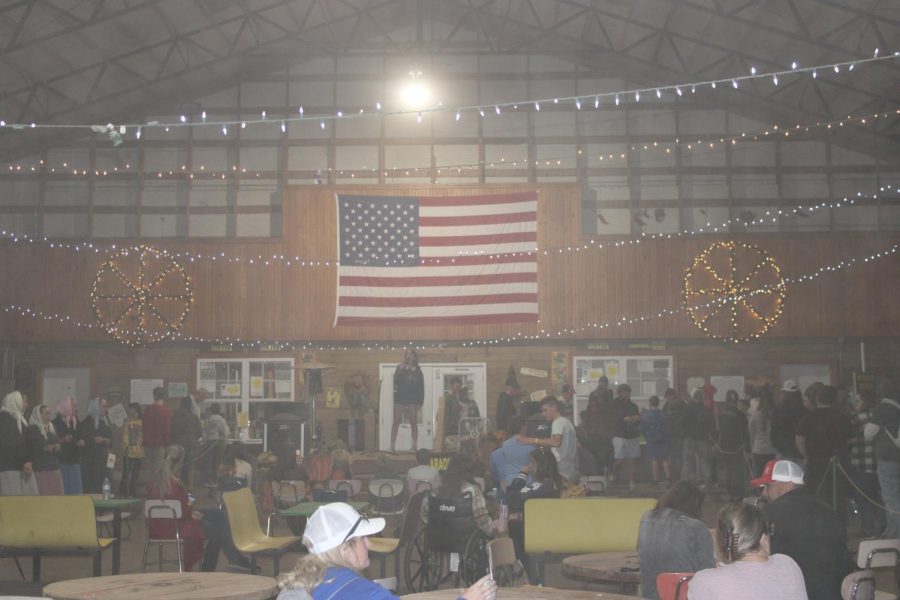 On October 15, Student Council loaded up the buses and headed for the Verona Corn Maze. With 41 students, Mr. Van Cleave and Mrs. Feldman had high hopes for the night.

Last year, Student Council organized the school’s “Monster Mash” event. While they enjoyed putting that on, they wanted to do something a little different this year. The final decision landed on the field trip to the haunted corn maze.

Mrs. Feldman said, “Mr. Van Cleave did a lot of work communicating with the people at the Verona Corn Maze and getting us a group rate.” With the prices settled, permission slips turned in, and students eager, the trip was under way.

The trip to Verona took a little over an hour, so by the time of arrival everyone was ready to get out. The first building they walked into had a big stage with people singing, multiple concession stands, rides, and activities.

After speaking with the staff at the corn maze, Mr. Van Cleave started passing out wristbands to the students. These wristbands, depending on what pass you bought, gave you access to different parts of the facility.

After passing through the first building, it opened up to a world of activities. There were multiple games set up, fire pits lit to sit and stay warm around, many different concession stands with different types of food, and a barn with different animals ranging from llamas to rabbits. Their main attractions, however, were the massive corn maze and the hayride where they gave you paintball guns and drove you through the forest, allowing you to shoot at “zombies” that would run up at you.

The corn maze was very difficult, with multiple dead ends and trails that lead nowhere. It took many people 25-30 minutes to get through it. However, some workers at the maze said they have had people stuck for 45 minutes up to an hour before.

Freshman Carson Trussell who joined this trip said, “It really turned out better than I thought it would be, I was told it was not gonna be that interesting but it turned out to be tons of fun.”

It is definitely not easy to get bored at the Verona Corn Maze, with activities to do everywhere you turn. Mr. Van Cleave and Mrs. Feldman had similar interests while at the corn maze, with Van Cleave saying his favorite thing he did there was, “Hanging out around the campfire cooking s’mores.” Feldman said hers was, “Chatting with people around the campfire and enjoying s’mores.”