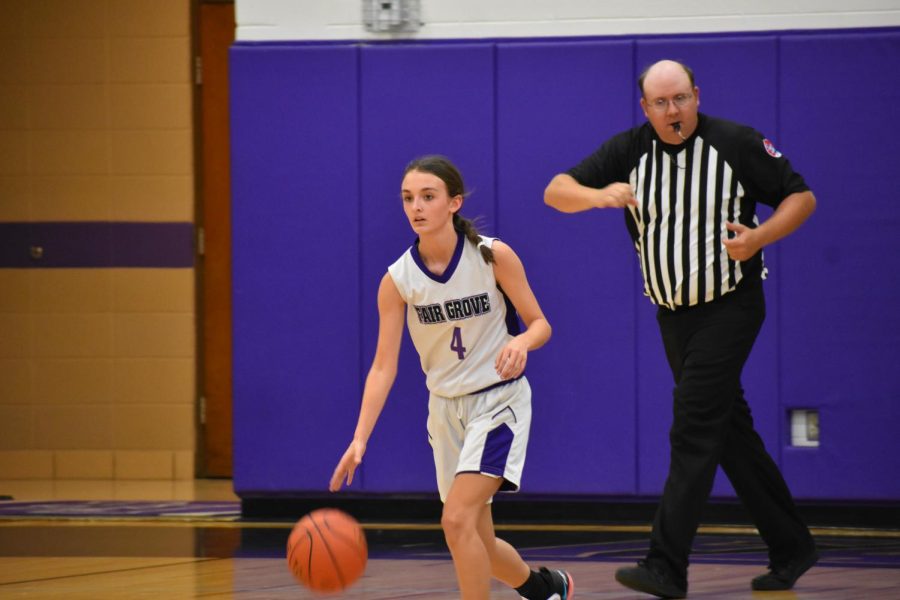 On November 1st, the Fair Grove Middle School girls basketball teams played their first game against Marshfield. The basketball team has now hit the court and will continue preparing for the season.

Tryouts for the basketball team were held on October 11th; since then the team’s preparations have taken off to make the girls the best they can be for this season. Allison Sechler (8) explained, “The preparation that we have been doing is we have been going over our plays from last year and running a lot to get us in shape.”

One of the middle school girls basketball coaches, Mrs. Green also shared, “We practice almost everyday. For some girls, this is a new experience to practice every day, so we improve just from that. We work on all aspects of the game: defense, offense, rebounding, passing, and team skills.”

Green shared why she enjoys coaching for middle school, “I love the game of basketball, so I love to instill the knowledge of the game in young players. I love seeing them be successful on the court after working hard in practice.” Green also stated the goals she has, “In middle school, we have 3 main goals: 1- Learn the game and build on our skills, 2 – Prepare for High School basketball, 3 – Have fun! It’s all about fundamentals and building skills at the middle school level.”

While preparing and practicing is fun, the girls couldn’t be more excited to play their biggest rivals, Strafford and Skyline.

Sechler shared, “The 2 schools that I’m most excited to play are Strafford and Skyline because they are our biggest competitors and they are really fun teams to play.”

When playing them she shares the strengths she believes the team has in order to beat them. “We have good post players and guards that will help us win and I think our biggest strength is our shooting or ball handling,” said Sechler.

Although the team feels they have good post players and guards they did share their weaknesses. Sechler said, “I think our weaknesses are our height and being able to remember plays, however Our team goals for this season is to talk more and become more of a team that works better together.”